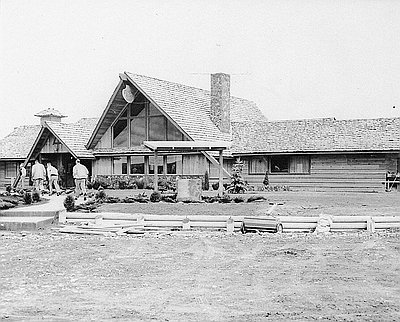 Lake County’s Christmas Valley Lodge is shown in the photograph above. It was taken by an Oregon Journal photographer in June 1962.

In 1960, the flamboyant ranch-buyer and land speculator Phil Pittman (who, with Reub Long, had worked tirelessly to bring electrical power to the Fort Rock/Christmas Lake section of the high desert) sold off over 72,000 acres of Christmas Lake Valley land to the Penn Phillips Company. The California-based real-estate company constructed a $100,000 A-framed lodge, pictured above, as well as a nine-hole golf course, an airstrip, and a small artificial lake on its newly acquired land. It also engaged in an aggressive and highly successful advertising campaign, selling parcels and lots to retirees and would-be farmers from the Los Angeles area. Within the first three months of advertising, the Phillips Company sold off nearly 100 percent of its holdings, but buyers were slow to arrive, and slower to stay.

In 1962, a representative of the Phillips Company predicted that Christmas Valley would soon have a population of 5,000. Five years later, however, the area’s small post office had only sixty-six box holders. “So where are the thousands of people?” the Oregon Journal asked in a July 11, 1967, article. “They are coming,” a company representative responded. “There will be no boom, but I believe in land. There isn’t enough of it. Everybody who bought here has been told they can’t come in and raise 20 acres of alfalfa and make a living, but they will come.”

But time would prove the company’s predictions wrong. The people did not come, probably because, as Oregon Tax Court Judge Edward Howell put it in a 1966 decision about tax valuation of Christmas Lake property, “the land, at least in its present condition, is arid, dusty, windy, isolated, [and] subject to temperature extremes.” Charged with misrepresentation by the state, and sued by unhappy purchasers, Penn Phillips apparently disappeared as a corporation by 1970.  In 1972, only 150 people actually lived on the Christmas Valley development, with its fancifully named “streets” leading out into the sagebrush.

Christmas Valley’s population experienced a small boom in the late 1970s, but even today fewer than 800 people call the place home. The lodge is still in operation, though, as is the golf course, legacies of one of the most controversial real-estate schemes in modern Oregon history.