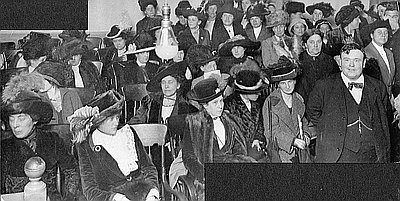 In 1912, Oregon women won the right to vote; for the first time, they could also serve as members of a jury. Dr. Marie Equi—to the far right wearing a white blouse and dark hat, looking over the shoulder of the only man in the photo—a well-known suffragist and advocate of a woman’s right to use birth control, was among the first group of women in Oregon to register for jury duty. Dr. Viola Coe, acting president of the Equal Suffrage Association in 1912, is sitting under the light bulb.

This marked the beginning of Oregon women’s full participation in the legal system. Not only were women now able to own property, sue and be sued, vote in school elections, and be admitted to the bar — all rights they had won earlier — they were also able to vote in primary and general elections and help decide cases as members of a jury.

In addition to woman suffrage, the controversial Dr. Equi was notable for her other causes as well. Decorated by the U.S. Army for humanitarian work, she also was targeted by her opponents for offering birth control and abortions to both working class and wealthy women — one of only a few Portland doctors who would do so — and for her anti-war stance and condemnation of capitalism.

She was arrested several times in association with her political work, once, in 1916, with Margaret Sanger and again in 1920 when she was sentenced to serve three years in San Quentin for her outspoken anti-war views. Afterward, she returned to Portland.  Equi raised a daughter there and on the Oregon coast and continued to support the IWW. Equi died in 1952.

This photograph features delegates to the annual National American Woman Suffrage Association Convention in Portland, June 29 through July 5, 1905. Although most of the convention sessions were held at the First Congregational Church, this photograph was taken in front of the Oregon building on the grounds of the Lewis …

Male politicians slowly expanded their concept of progress to include the enfranchisement of women, but women had already developed a broader agenda that they wanted to bring into the political arena. One of the leaders in the campaign for women’s suffrage in Oregon was Abigail Scott Duniway. In 1871, Duniway …