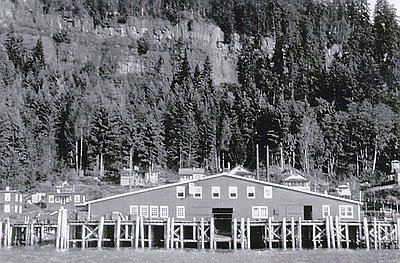 This photograph shows the Eagle Cliff Cannery, located on the Washington side of the Columbia River about fifty miles upriver from Astoria. During the winter of 1866-1867, brothers George and William Hume partnered with canning expert Andrew Hapgood to open the first salmon cannery on the river. In 1868, the Portland Oregonian reported that Hapgood, Hume and Co. expected to produce 300,000 cans of salmon, much of which would be exported to Australia. The development of canning technology, which allowed for safe export to distant places, and the growth of an industrial working class in Great Britain and the East Coast combined to create a market for the Pacific Northwest salmon.

Salmon harvests peaked in the early 1880s, with canneries producing more than 600,000 cases in a season. Beginning in the 1880s, however, habitat degradation and over-fishing sent the industry into a long decline. In 1883, as many as fifty-five canneries were operating on the Columbia River. The last Columbia River cannery shut down in 1980. The building shown in this photograph was probably constructed after 1900.

These labels show three different brands of Columbia River salmon sold during the late nineteenth and early twentieth centuries. At the top is the Otter Brand, packed by The Dalles Canning and Packing Company, located in Rockfield, a former train stop that is today part of the City of The Dalles. In …