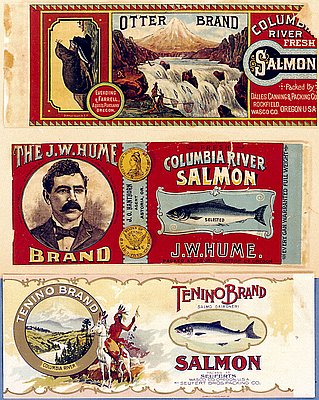 These labels show three different brands of Columbia River salmon sold during the late nineteenth and early twentieth centuries. At the top is the Otter Brand, packed by The Dalles Canning and Packing Company, located in Rockfield, a former train stop that is today part of the City of The Dalles. In the middle is the J.W. Hume Brand, packed by Joseph Hume’s cannery in Astoria. At the bottom is the Tenino Brand, packed by the Seufert Brothers Company in The Dalles.

Joseph Hume, whose brothers set up the first cannery on the Columbia River in 1866, operated a cannery in Astoria until 1881, when Samuel Elmore bought him out. He was known for the quality of his salmon. In 1896 Hume moved all of his operations to Alaska.

The Seufert Brothers Company built their first fishwheel in The Dalles area in 1884. Two years later they leased some land to the Everding and Farrel Company, which built the first cannery in The Dalles area. The Seuferts purchased this cannery in 1896. They soon acquired all of the competing canneries in the area, including The Dalles Canning and Packing Company in 1907, becoming the largest commercial fishing operation on the upper river. Francis Seufert, the grandson of one of the founders of the company, wrote that the competing canneries “finally decided to sell out because they felt there wasn't enough profit in salmon canneries at The Dalles.”

The Seufert Brothers had several different brands corresponding to different species and grades of salmon. The Tenino Brand label above, for example, is labeled Salmo Gairdneri, the former scientific name for steelhead (known today as Oncorhynchus mykiss). They also canned chinook, sockeye, coho, and chum. The Seufert Brothers Company and other Columbia River salmon packers sold their canned salmon around the world. Great Britain was the primary market for U.S. canned salmon during the late nineteenth and early twentieth centuries, but Columbia River salmon also found its way to Australia, Africa, India, and the eastern United States.

Declining salmon runs, competition from other regions, the expansion of the ocean fishery, increased prices for canned salmon, and decreased worldwide demand all contributed to the decline of the Columbia River salmon canning industry during the twentieth century. By 1973 only 25 percent of the catch was being canned, down from 75 percent just ten years earlier. By the end of the 1970s most of the river's canneries had closed.

This photograph, believed taken by Benjamin Gifford around 1928, shows the Seufert Brothers Company Salmon and Fruit Cannery in The Dalles. At the left of the photo is a sign painted by Francis A. Seufert (1853-1929) on the roof of his horse barn in response to an initiative that banned …