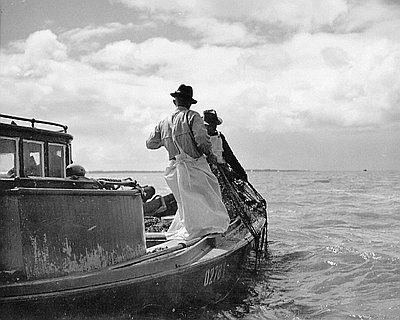 This 1937 photograph, taken by Ray Atkeson, shows men fishing with a gillnet near or at the mouth of the Columbia River. As a professional photographer, Ray Atkeson documented Oregon’s people and landscapes from 1928 until his death in 1990.

This picture shows a bow picker, a locally used style of boat that was adapted for use with gasoline engines from the older, double-ended, sail-rigged boats. Gillnetters stored their nets in the front portion of bow pickers. They let one end out while keeping the other end and drifting downstream, forming a mesh barrier that fish became trapped and entangled in.

In the late 19th century, many of the gillnet fishermen were immigrants from the Scandinavian and Slavic regions of Europe. They worked on the lower Columbia River and in the dangerous waters outside the river’s mouth, where some were injured and drowned. They competed for salmon and other fish with commercial fishermen who were using fish traps, and fish wheels.

By the 1950s, dams, pollution, overfishing, negative effects from hatcheries, and habitat change, severely reduced returning salmon to the Columbia River. Because fish traps and wheels were outlawed, gillnetters were the only remaining non-Native commercial fishermen on the river. However, the fishery continued to decline and many left the business, moved or commuted to Alaska waters, or turned to the crab and shrimp industries. Today, some gillnetters continue to fish the Columbia River. Native fishermen also use gillnets upriver from Bonneville Dam.

Bergeron, Jim. “Work is our Joy: The Story of the Columbia River Gillnetter.” Documentary film, 1989, 32 minutes.

Summer Fishing Camp on the Columbia

This painting was done in 1884 by J. E. Stuart, a prolific and popular American artist of landscapes, portraits, and American Indians. It depicts a late summer fishing camp on the Columbia River near Celilo Falls. The painting is in the collections of the Oregon Historical Society.