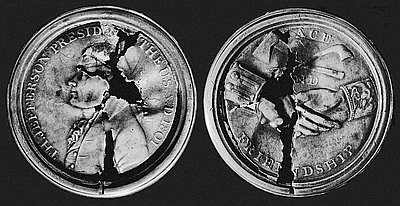 During the course of the Expedition from St. Louis to the mouth of the Columbia River, Meriwether Lewis and William Clark handed out several dozen medals to Native leaders, as tokens of peace, symbols of the friendship of the American government, and an implied acknowledgement of United States sovereignty in the Louisiana Purchase territory. The medals came in three sizes—55mm, 75mm, and 105mm—and were handed out according to the perceived prestige of a Native leader: larger medals were presented to the most important chiefs, and smaller medals were given to secondary chiefs. Thomas Jefferson wrote that the practice of handing out medals to prospective allies was “an ancient custom from time immemorial.” The medals were “marks of friendship to those who come to see us, or who do us good offices, conciliatory of their good will towards us, and not designed to produce a contrary disposition towards others.”

In 1899, the newly formed Oregon Historical Society acquired one of the small medals Lewis and Clark had presented to someone nearly a century before. Although in poor shape, the Jefferson peace medal was one of the few surviving material reminders that the Corps of Discovery had passed through Oregon. Soon after receiving the rare artifact, the Oregon Historical Society adopted the design on the back of the medal as its seal, which is still in use today.

The provenance of the medal in the Society’s collection is not clear. It was donated to OHS by Winslow B. Ayer, a Portland businessman who had received it from Major Edwin MacNeill. MacNeill had worked in Oregon as a railroad executive during the 1890s, and the limited written evidence suggests that a railroad survey crew found the medal in the 1880s, perhaps on an island near Wallula, Washington. Another account reports that the medal was found on the Nez Perce Reservation in Idaho. Archivist and historian Richard Engeman wrote in the Oregon Historical Quarterly that the medal was likely found by grave robbers, perhaps in the grave of Chief Yelépt (Walla Walla). Yelépt received a least one medal when Meriwether Lewis and William Clark met with him and others in October 1805 near present-day Wallula. The Oregon Historical Society returned the peace medal to the Confederated Tribes of the Umatilla Reservation in December 2009, under the Native American Graves Protection & Reparation Act (NAGPRA).

The people who received a medal from Lewis and Clark had mixed reactions to the gifts. In February 1806, for example, Clark wrote that when they gave a small medal to Tâh-cum, a Chinookan headman at the mouth of the Columbia, he “Seamed much pleased.” A couple of months later, the captains gave a medal to an unnamed Chinookan headman farther upriver, but he was apparently unimpressed and “soon transfered [it] to his wife.” The Hidatsa of the northern Plains had an even more negative reaction to the medals. Resentful of what they considered the strangers’ arrogant behavior, the Hidatsa gave the medals to their enemies, hoping to bring them bad luck.

Months before his message to Congress, the president had chosen Meriwether Lewisto lead the western expedition. A fellow Virginian and son of a plantation owner near Monticello, Lewis was a captain in the army with extensive knowledge of military discipline, experience on the western frontier, and as Jefferson put it …