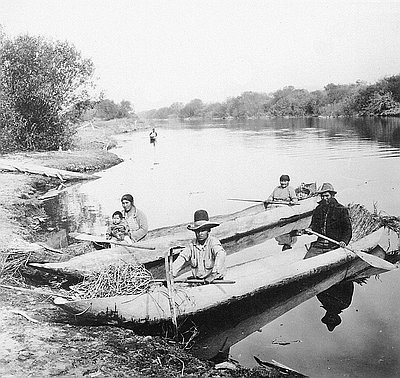 The Klamath Indians traditionally lived in villages and seasonal camps in southern Oregon, near upper Klamath Lake, Klamath Marsh, and the lower Williamson River. Canoes were very important in Klamath culture, used for fishing, transportation, and gathering wokas (the seeds of pond lilies), roots, berries, and tule reeds. Reeds and grasses were used to build houses and make mats. Some boats were also made of tule reeds.

Photographer Edward S. Curtis (who did not take this photograph) visited southern Oregon in 1923. He described Klamath canoes as “the thin shell of log-pine, cedar, or Douglas spruce‚ undercut at both ends at an angle of about forty-five degrees, but less at the bow than at the stern. Both ends are shovel-nosed, that is, they are not pointed but are practically as wide as the beam of the craft.”

In 1864, the Klamath and Modoc tribes and the Yahooskin band of Paiutes signed a treaty with the U.S. government ceding nearly twenty million acres of land and creating a 1.1 million-acre reservation. The tribes used their land-based resources, including trees and game animals, for economic success, which influenced Congress to “terminate” the Klamath tribes in 1954. The government paid $220 million to the Klamaths for the reservation. The tribes lost their land, income from timber sales, identity as native people, and government benefits. In the 1970s, the Klamaths were among the poorest of Indian people in the nation. In 1986, the tribes regained federal recognition. Today, they continue to campaign for the return of part of their land that is now in the Winema and Fremont National Forests.