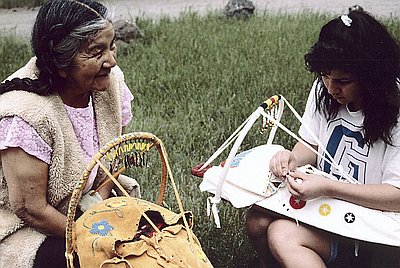 This photograph of Priscilla H. Bettles (left) and her grand daughter, Priscilla Witcraft (right), posing with their newly fashioned cradleboards, was taken by Folklife director Nancy Nusz on June 13, 1991. At the time, Bettles was teaching her grand daughter how to make the cradleboards through the Traditional Arts Apprenticeship Program of the Oregon Folklife Program.

Priscilla H. Bettles was born on the Klamath Indian Reservation in 1929.  She received training in traditional arts from her mother (Warm Springs, Wasco), aunts, and grandmother. Bettles’ traditional artwork—including tanned hides, beadwork, moccasins, clothing, and cradleboards—earned her a reputation among her people as a master artist. She made her first cradleboard when she was eighteen and constructed them for most of her eight children and thirty-seven grandchildren.

Bettles begins constructing a cradleboard by cutting the traditional shape out of a piece of plywood.  She estimates a newborn will normally be from 18–20 inches long, then uses her intuition to decide the length of each individual board. Once cut, she smoothes the rough edge of the plywood piece and covers it with fabric.  Next, Bettles carves holes in the top handle of the board where she will attach the hoop and thongs at the end. She makes mattress-like pads for the child’s comfort, which she places flat on the board’s surface. She then attaches a special pad at the neck to ensure normal shaping of the infant’s head and one at the knees to support the child’s lower body while in the upright position.

Working from the top to the bottom of the board, she first attaches the two side panels and follows with the hood—all of which are made from either deer or elk hide. Antler buttons are used on the backside of the board to secure the binding material firmly. Finally the thongs, strips of hide, are extended through the holes in the top of the board, looped around the hoop to hold it in place, and tied together at the foot. The hoop is a piece of willow or other bush branch that is bent into shape and secured above the head of the child. This functions as a protective roll-bar from which strands of beads, shells, and other decorative objects, that help children develop their hand-eye coordination, are hung. Bettles describes the completed cradleboard as “a type of half-way house for the baby.”

The Klamath Indians traditionally lived in villages and seasonal camps in southern Oregon, near upper Klamath Lake, Klamath Marsh, and the lower Williamson River. Canoes were very important in Klamath culture, used for fishing, transportation, and gathering wokas (the seeds of pond lilies), roots, berries, and tule reeds. Reeds and …

This photograph of Maynard White Owl Lavadour beading a cradleboard was taken by Eliza Buck in 1994. At that time, Lavadour was teaching Marlene Lavadour, Martha Franklin, Ellen Taylor, Mona Yeager, and Marcella Spencer how to make cradleboards in the tradition taught to him by his Cayuse and Nez Perce …