Launch of the North West America 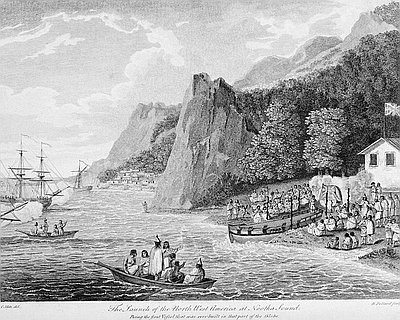 British maritime fur trader John Meares included this engraving in his narrative entitled, Voyages Made in the Years 1788 and 1789 from China to the North West Coast of America, first published in 1790. The engraving may have been produced in collaboration with the British book illustrator Thomas Stothard.

John Meares began his career at sea with the Royal Navy in 1771. After leaving the navy at the rank of lieutenant in 1783, he entered the merchant shipping profession. In the mid-1780s he decided to mount a commercial venture to exploit the maritime fur trade market then developing along the Northwest Coast. Backed by British merchants in India, Meares made his first voyage to the region in 1786-87, spending a difficult winter in present-day Prince William Sound, Alaska. A year later he returned to the Northwest with two ships, the Felice and the Iphigenia. The expedition arrived at Nootka Sound on Vancouver Island in May 1788 and made a base camp at Friendly Cove with the permission of the local Native leader, Chief Maquinna. Meares then ordered the construction of a smaller vessel, the North West America, for use in local trading along the coastal waters. In September 1788, Meares sailed to China in the Felice with his cache of furs while Captain William Douglas remained at Nootka Sound with the Iphigenia for another season of trading.

This engraving illustrating the launch of the North West America is a fanciful representation of Meares’ acutal experience at Nootka Sound. Rather than a dominant wooden structure, the base camp at Friendly Cove featured a temporary shelter and a few cannons. The view that local people from Maquinna’s village of Yuquot were witnesses to a display of British imperial power is equally misleading. During the early decades of the maritime fur trade, village leaders in the trading centers such Nootka Sound and Clayoquot Sound controlled the commerce between Native and newcomers. These leaders held the upper hand due to the strategic location of their villages and the precarious position of the European and American traders, who were thousands of miles away from their home countries and the important trading ports in Southeast Asian. Meares’ own narrative attests to the “methods employed by the Natives to advance the price of sea otter skins.”

When European sea captains first glimpsed the Pacific Coast, the vast and dense forests caught their attention. British trader John Meares, who sailed the Northwest Coast in 1788, described the land along the Olympic Peninsula as “wild in the extreme...immense forests covered the whole of it within our sight down …