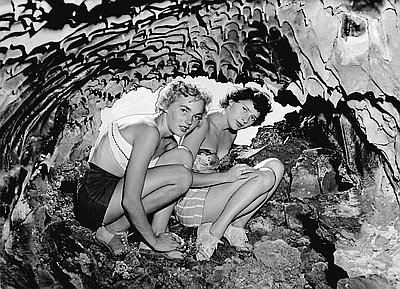 This touched-up photograph of two girls posing inside a lava mold, in what came to be called the Lava Cast Forest, was taken by Joe Van Wormer for an Oregon Journal article, “Mid-Oregon’s Ghost Forest,” that appeared on May 17, 1953.  The lava casts were the results of a slow-moving lava flow that originated from the Northwest Rift Zone of the nearby Newberry Volcano approximately 6,000 years ago.  The lava flow flooded over trees in its path.  As the lava cooled and hardened the trees burned away inside, leaving hollow casts.

Central Oregon’s Lava Cast Forest first came to the attention of the American public in 1928.  In April of 1942, the U.S. Forest Service designated 5,120 acres of the region as the Lava Cast Forest Geological Area.  The lava casts, along with nearby lava tunnels, ice caves, and lava beds, were promoted as a tourist attraction by the Forest Service and the Bend Chamber of Commerce.  By the mid-1940s, thousands of tourists visited the volcanic sights annually, many stopping by on their way to other popular destinations in the Deschutes National Forest.

In 1963, largely a result of the promotional efforts of Hollis Dole, Director of Oregon’s Department of Geology, scientists from the U.S. National Aeronautic and Space Administration (NASA) developed an interest in using the lava fields for training and preparation for the nation’s first moon landing.  NASA scientists were attracted to the area because the lack of erosion throughout the volcanic flows offered them a glimpse of what they might confront on the  moon’s surface. From 1964 through 1966, at least 46 astronauts trained for lunar missions in the area.  To commemorate NASA’s experiences in central Oregon, astronaut James B. Irwin delivered a rock from one of Oregon’s lava flows to the lunar surface during the Apollo 15 mission on July 31, 1971.

NASA’s interest in the area led to it being dubbed “moon country” throughout the 1960s and into the 1970s.  Not surprisingly, tourism boomed.  By the mid-1970s roughly 150,000 tourists visited the region each year.  To accommodate the increased popularity, the Forest Service built the Lava Lands Visitors Center, completed in September of 1975.

Newberry Volcano is a unique geological formation within Oregon, both in terms of its size …

This photograph, from the collections of the Schminck Memorial Museum, was taken in April 1900. It shows sisters Lula Schminck and Florence Klippel on a lava bed in Summer Lake Valley.