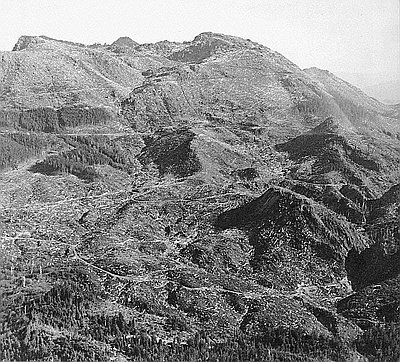 Al Monner took this 1968 photograph of clear-cut logging near Neahkahnie Mountain, located in northwest Tillamook County. Monner, who died in 1998, was a photographer for the Oregon Journal.

Lumber companies have logged intensively on private land near Neahkahnie Mountain and the nearby Nehalem River since the early twentiethth century. Many of the trees were Douglas firs, part of a coastal temperate rainforest that spanned as far north as Southeastern Alaska.

Over time, technological inventions — such as steam engines and chainsaws — allowed loggers to remove trees with increasing speed. In the 1930s, clear-cutting became the predominant logging method in the Pacific Northwest. Forestry workers argued that removing all the trees was more efficient and stimulated healthy re-growth by exposing the forest floor to sunlight. The 1941 Oregon Forest Conservation Act promoted clear-cutting, but also required lumber companies to replant seedlings.

By the late 1960s, many people began to oppose clear-cut logging. Protesters charged that removing all of the trees in an area caused erosion, damaged streams, and decreased biodiversity.

The steam donkey, invented in 1880, greatly increased the efficiency of logging operations in Oregon’s forests. It replaced animal labor, which could not work as fast in rainy and cold weather or on steep terrain. Loggers attached felled trees to a steam donkey by a cable line that pulled the …

This photograph shows a group of high school boys from Hillsboro, Forest Grove, and Timber preparing to replant a section of the Tillamook Burn. It was taken by an Oregon Journal photographer in March 1945.