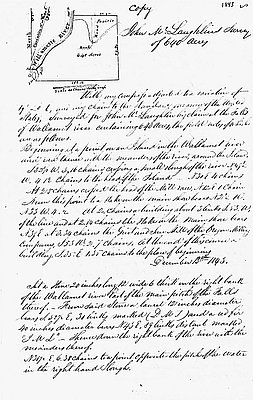 This J. M. Hudspeth survey was carried out at John McLoughlin’s request on December 16, 1843. At the time, McLoughlin was involved in a land dispute with Alvin Waller who had taken up residence on McLoughlin’s claim.

McLouglin, chief factor of the Hudson’s Bay Company’s (HBC) Columbia Department, early recognized the value of Willamette Falls as a tool in the  development of a viable settlement in the Willamette Valley. In 1828, HBC governor George Simpson instructed McLoughlin to set up a company mill at the falls but a series of conflicts with local Native groups led McLoughlin to build closer to Fort Vancouver. During the 1830s, the company’s presence at the falls amounted to “three log houses”, a mill race, some “squared timber,” and a company “house and store”.

The company’s Willamette Falls claim went unchallenged until the spring of 1840 when superintendent of the Methodist Mission to the Oregon Country Jason Lee ordered missionary Alvin Waller to establish a claim on the same land. By the early 1840s, Lee’s mission had become increasingly dependent upon the HBC for their very survival and Lee saw the impending American arrival as an opportunity to gain economic independence from the British monopoly. Lee assured McLoughlin that Waller’s claim was made in case the HBC claim should fail under American law. Believing the missionaries attended “more to temporal than spiritual affairs,” Simpson instructed McLoughlin to “occupy” the falls “on behalf of the Company.” Judging a personal claim more secure under American law than the company’s, McLoughlin assumed responsibility for the land and all improvements made upon it.

With the help of arbitrators, the land claim conflict between Waller and McLoughlin was resolved in the spring of 1844. Paying Waller “five acres and five hundred dollars” and “14 Lots to the Methodist Mission” McLoughlin rid himself of Waller’s counterclaim, a price McLoughlin thought “exorbitant,” since he had originally provided Waller with the land and the squared wood to establish his home at no cost. When the Methodist Mission Board closed the Willamette Mission in 1844 the lots and the buildings erected upon them were sold back to McLoughlin at a cost of $5,400.

Unfortunately for McLoughlin his land problems continued. Oregon City merchant George Abernethy, refused to acknowledge the validity of McLoughlin’s Willamette Falls claim. Although McLoughlin did his best to secure a clear and lasting title under American law, Abernethy and his allies (including Judge W. P. Bryant and Samuel R. Thurston) managed to get a provision written into the Donation Land Law of 1850 invalidating McLoughlin’s claim. Subsequently, by federal law, it was “donated” to Oregon’s Legislative Assembly in 1852.

John McLoughlin was born in 1784 in Quebec, Canada, to a poor Catholic father and upper class Protestant mother. Apprenticing a physician, he became a doctor himself in 1803. McLoughlin fled Quebec that year after a scuffle with a British Army officer. He headed to the Canadian West to join …

From Adolph Etoline to John McLoughlin, 1843

On September 1, 1843, Adolph Karlovich Etoline, governor of the Russian American Company (RAC), wrote this letter to John McLoughlin, chief factor of the Hudson’s Bay Company’s (HBC) Columbia Department, most of which deals with operational arrangements between the two companies.

In February 1839, high-level negotiations between the HBC and RAC …

This 1867 photograph, taken by Carleton Eugene Watkins, shows Oregon City and the Willamette Falls soon after the first portage railroad was built there. Oregon City had been incorporated in 1844 and was the first official city established west of the Rocky Mountains. The earliest non-Native settlers near Willamette Falls were …