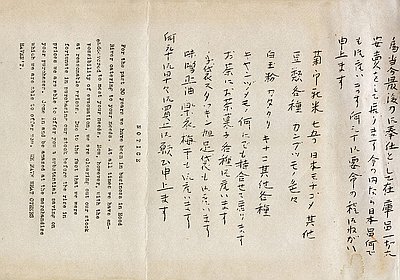 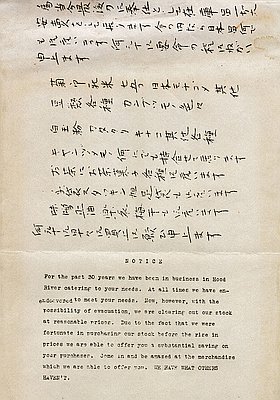 The day after Japan attacked Pearl Harbor in December 1941, the U.S. Treasury Department shut down the Yasui Brothers’ Store in Hood River. Five days later, the FBI arrested Masuo Yasui, who had owned the store with his brother, Renichi Fujimoto, for more than thirty years. The United States government wrongly suspected Yasui of spying for Japan, probably because he had received a special award, a Paulownia Cup, from the Japanese government. Fujimoto posted this notice on the store in March 1942 when the government allowed him to reopen for a one-month clearance sale.

The brothers were forced to sell their merchandise for less than it was worth. They closed the store permanently after President Franklin D. Roosevelt signed Executive Order 9066 in February 1942, which allowed the U.S. Army to forcefully remove all Japanese immigrants and Japanese Americans from the West Coast and imprison them in what were called internment camps. In Oregon, 3,714 Japanese were rounded up and sent to the Heart Mountain Relocation Center in Wyoming, the Minidoka Relocation Center in Idaho, and the Tule Lake War Relocation Center in northern California.

The government determined that Yasui was a “potentially dangerous” alien enemy. He was separated from his family and imprisoned in a series of military installations, including Fort Sill, Oklahoma, and Camp Livingston, Louisiana. He was not released until January 2, 1946, several months after the war ended. Yasui’s son Minoru spent time in solitary confinement during the war because he challenged a wartime curfew placed on Japanese Americans.