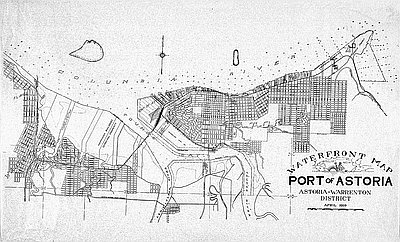 In 1919, the Port of Astoria began to improve its commercial maritime shipping capacity. Contractors built new piers, a flourmill, a grain elevator, and expanded the port’s warehouse space. This map also shows potential waterfront developments that were never built. In 1919, at the end of World War I, many shipbuilding companies in Astoria and other Pacific Northwest cities went out of business, and the region suffered an economic depression.

In the early 1920s, logging and salmon canning were the largest industries in Clatsop County. Logs cut from the coast range were floated on the water from Warrenton to Astoria across Youngs Bay to mills in Astoria. In 1922, the U.S. Army Corps of Engineers reported that forty-eight percent of the foreign commercial exports from Astoria was lumber, mostly destined for Asia.