Quilting and African Americans in Oregon 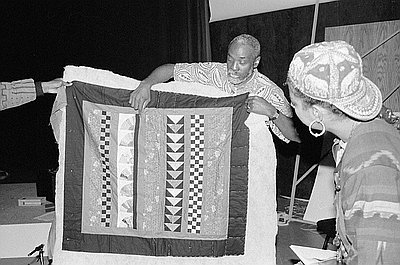 This photograph of Portlander Cleveland Smith exhibiting quilt-work was taken by Nancy Nusz during her fieldwork for the Oregon Folklife Program in the summer of 1991.

The exact origins of quilting are unknown; however, historians have traced quilting techniques used for clothing and furnishing to many early world civilizations. According to Julie Johnson, quilting specialist at the Center for Great Plains Studies in Kansas, the earliest known quilted garment was found on an ivory statue of an Egyptian Pharaoh who ruled in about 3400 B.C.E. Historians believe that crusaders brought quilting to Europe from the Middle East in the late eleventh century.

African-American quilting has been traced back to prominent civilizations in Central and West Africa.  As African goods and slaves were traded in the Caribbean, Central America, and the southern United states, African quilting traditions were transplanted and blended with European traditions to create unique African-American themes and patterns influenced by religion and culture.

African Americans brought these and other cultural traditions to Oregon by the 1860s, although significant African American migration and settlement in Oregon did not occur until the 1880s and 1890s. African Americans migrated to Oregon as employment opportunities became available with railroad expansion.  These new Oregonians found jobs as porters, maintenance technicians, dining car waiters, and mail clerks. By the mid-1890s, a sizeable community had settled in a neighborhood near Portland’s Union Station. The construction of new bridges, an immigrant population explosion, and the opening of Eastside railway centers pushed and pulled the African American community across the Willamette River.

Restrictive covenants and exclusionary clauses in real estate deeds forced African Americans into the northeast Portland neighborhood of Albina, distinguishing Portland by the 1930s as one of the most segregated cities in America. The community, however, grew and supported African-American-owned businesses and social organizations.  They chartered the Portland chapter of the National Association for the Advancement of Colored People (NAACP) in 1914, an Elks Lodge in 1906, and sponsored the Advocate and Portland Times—two prominent voices for the African-American community—in the 1920s and 1930s.

Further Reading:
Portland Bureau of Planning, “The History of Portland’s African American
Community: 1805 to the Present,” 1993.

Union Station, shown here in 1913, opened in 1896 after several delays.  It was one part of Henry Villard’s grand vision for Portland.  Villard wanted to make Portland an important city.  With the completion of the transcontinental railroad, Union Station would be the passenger terminus for four railways, and the gracious …