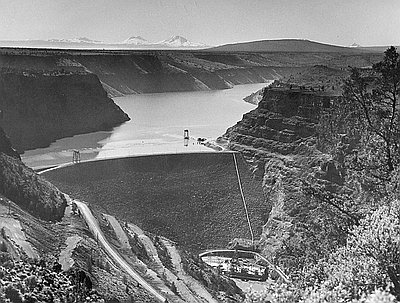 This photograph of the Round Butte Dam was originally published on June 11, 1965, as an illustration for an Oregon Journal article, “$62 Million Round Butte Dam on Mighty Deschutes Dedicated,” written by John McWilliams.  More than 10 million tons of earth-fill were used to create this 440-foot tall, 1,320-foot wide, and 1,570-foot thick at the base storage dam.  Three 1,000-kilowatt generators produce energy for customers of Portland General Electric (PGE).  The Round Butte Dam is the largest hydropower project located completely in Oregon, creating a reservoir that stretches eleven miles up the Metolius River, eight miles up the Deschutes River, and six miles up the Crooked River.

According to PGE, the Round Butte Dam was constructed in order to firm up their power supply in response to the Bonneville Power Administration’s anticipated difficulties in providing firm power to private utilities beginning in 1962–1963. As was the case with PGE’s Pelton Dam, located just seven miles downriver, fishing interests viewed the construction of Round Butte Dam as a threat to the anadromous fish populations of the Deschutes River. Although fishing groups fought to keep the dam from being built, they were ultimately unsuccessful, finding limited success only in establishing requirements for PGE to maintain minimum river flows.

In order to build the Round Butte Dam, PGE first had to secure the permission of the Confederated Tribes of the Warm Springs Reservation, owners of the land adjoining the project along the western bank of the Deschutes River. In 1959, PGE and the Warm Springs tribes agreed to a combined compensation package for the Pelton/Round Butte complex of $220,000 per year. Additionally, the tribes secured the sole right to sell fishing permits for use in the dams’ reservoirs.

In 1960, the Federal Power Commission amended PGE’s license to operate the Pelton Dam project to include the Round Butte Dam, giving the entire Pelton/Round Butte complex a fifty-year operating permit. Together, the two projects are among the largest non-federal hydropower developments in the country. In 2002, the Confederated Tribes of Warm Springs became one-third owners of the Pelton/Round Butte complex.  Two years later, the Federal Energy Regulatory Commission relicensed the complex for another fifty years.

This photograph of the proposed site for the Pelton Dam accompanied a January 20, 1949, article in the Oregon Journal. The proposed dam site was within an 800-foot-deep canyon on the Deschutes River just northwest of Madras. Initially proposed by the Northwest Power Supply Company, by January 1950 Portland …

This 1928 photograph shows two men standing in an irrigated alfalfa field at Parks Ranch in the Fort Rock Valley, located in central Oregon’s high desert. The Fort Rock Development Company, founded by Henry M. Parks, used this photograph to promote farming in the valley. Parks, a geologist who had …