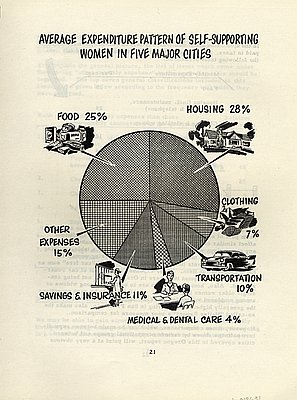 During the mid-1960s, the State of Oregon Bureau of Labor, under direction from Commissioner of Labor Norman O. Nilsen, conducted a study on the financial and living patterns of working women in Oregon who were economically dependent on their own earnings. A survey distributed in eight major cities questioned self-supporting women on their income, expenditures, and quality of life. This pie chart illustrates the responses of the participants regarding their average expenditures. It is featured in "The Self-Supporting Woman in Oregon: Report on an Inquiry into Her Economic Living Pattern," which presented the findings of the study.

After gathering anecdotal evidence and analyzing statistics on the respondents' ages, marital status, occupations, spending habits, dependents, wages, and more, the report made several grim conclusions. Economic difficulties faced by this group included low wages and the perpetuation of depressed occupational fields. The findings suggested that employers justified these conditions with a widespread social misconception that all women who worked did so to supplement men's wages, not to support themselves.

Often, the study noted, women who most needed to earn money took jobs that paid the least. Recently divorced or widowed women entering or reentering the workforce after many years raising children often took jobs in retail sales, service occupations, and other areas that required little training. "We just exist from pay day to pay day," noted one respondent. Women with dependents, a group that comprised well over a quarter of those surveyed, had less discretionary income than the average participant. When asked what they would cut from their monthly budget if they had twenty-five dollars less to spend, women with dependents named food first and clothing second; women without dependents said the reverse.

In 1970, State Labor Commissioner Norman Nilsen appointed an investigative committee to study gender discrimination practices in Oregon workplaces. One of the objectives was to learn what caused the high discrepancy between the numbers of men and women in executive or managerial positions. Through public hearings in Eugene, Medford, Salem, Pendleton, and Portland, the study found discrimination practices among some employers in methods of job recruitment, hiring practices, and training procedures. Other evidence pointed to employers who created pay classifications based on whether women or men performed the job. The study prompted Nilsen to create an educational program to inform employers and employees about the laws related to sex discrimination in the workplace.