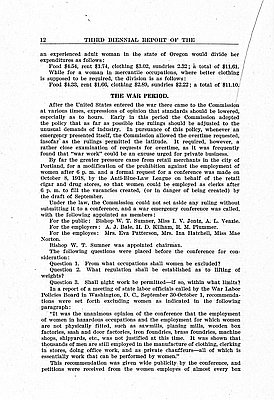 In this excerpt from a biennial report the Oregon Industrial Welfare Commissioners commented on the experiences of Oregon’s female laborers during World War I. Throughout the United States, more than a million women helped to manufacture war products during the war. Secondary industries also hired women to fill positions traditionally held by men. Women in Oregon supported the war as mail carriers, freight truckers, and scrap iron sorters; they worked in shipyards, brass foundries, wooden box factories, and railroad yards, for example.

The Oregon State Legislature created the Oregon Industrial Welfare Commission in 1913 to set minimum wage limitations and monitor working conditions for women. When the United States entered the war, employers requested the commissioners relax labor standards. To help decide if the commission should alter its orders on items such as overtime and night work, it called a war emergency conference. The war ended before conference members concluded their work; therefore, no special orders were issued as a result of the war.

Yet, the war impacted many working women in Oregon—if only temporarily. The commissioners reported that the women who switched to traditionally male occupations “gladly accepted the new responsibilities,” partly out of patriotism, and partly because they received better pay and more regular hours. With the exception of railroad companies, employers paid women less than men; however, women could still earn more than they had as laundresses or domestic workers.

Although the money saved by employing women may have influenced employers, the commission reported an overwhelming acceptance of female employees. The employers described them to be “without exception…as capable as men.” The women “were steadier, quicker and more dependable workers.” Some expressed their intention to keep their female employees after the war, noting that “women had made a new place in industry for themselves.”

Historians of women’s labor during World War I agree that women laborers made few lasting gains as a result of the war. The wartime economy did not introduce first-time wage earners to the workforce. Instead, it offered temporary advancements from lower paying occupations. Despite the employers’ comments, women lost jobs when soldiers returned. However, this document highlights the ease and eagerness with which some Oregon women performed new occupational roles and hints at an evolving cultural attitude regarding the capabilities of women at work.

Greenwald, Maurine Weiner. Women, War, and Work: The Impact of World War I on Women Workers in the United States. Westport, Conn., 1980.

Native American women from Chemawa train to work in shipyards

When the labor market opened up during World War II, more than 65,000 Native Americans worked for war industries or joined the armed forces. Historian Grace Gouveia estimates that one fifth of Native American women who were able to work took jobs off the reservations. The Bureau of Indian Affairs (BIA) …