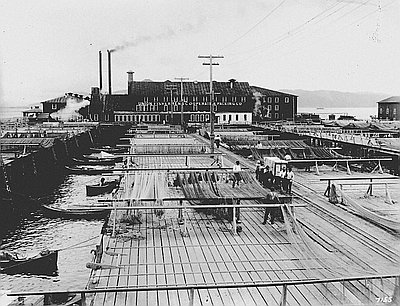 The photograph shows the cannery building and net drying racks of the Union Fishermen’s Co-Operative Packing Company in Astoria in the early 1920s. The salmon canning industry developed along the Oregon Coast and on the Columbia River in the late nineteenth century, with Astoria at its center. Canned salmon was a major export, both overseas and in the United States, where it became an inexpensive staple of Midwestern diet.

In the 1890s, Astoria fishermen warred with local canneries over prices paid for fish, hazardous conditions, and the use of fish traps. A disastrous fishermen’s strike in 1896 resulted in the formation by gillnet fishermen of the Union Fishermen’s Co-Operative Packing Company. A preponderance of the gillnet fishermen were of Finnish, Norwegian, Swedish, or Icelandic birth or descent. The Scandinavian fishing heritage persisted in Astoria, and the cooperative members were heavily Scandinavian. The company built its new cannery building in Astoria’s Uniontown district. Uniontown (named not for the cannery but for the real estate plat, the Union Addition) was also the principal Finnish community, the site of Soumi (Finland) Hall, the Finnish Meat Market, and several public steam baths or saunas.

Elevated over the Columbia River on wooden pilings, the Union Fish cannery was built in 1897. The basic building, some 50 feet by 200 feet, contained equipment for gutting, filleting, packing, sealing, and cooking the fish, and labeling and storing the finished cans. Much of the cannery labor was Chinese. Between the shore and the cannery were ranks of wooden racks for drying the gillnets, so called because the mesh of the net caught the migrating salmon behind their gills. Alongside the drying racks were some of the small gillnet boats, powered by two triangular sails. Under sail, the boats resembled butterflies, giving rise to the term “butterfly fleet” for the gillnet fishermen. Union Fish expanded over the years to become one of the largest packers in Astoria. The steep decline of the canned salmon industry led to the sale and dissolution of Union Fish in 1975.

Similar vernacular wooden industrial buildings once lined the waterfront in Astoria and in other locations such as Newport and North Bend on the Oregon Coast. There were also smaller fish canneries at Clifton, Warrendale, and The Dalles on the Columbia River. Other industries—ship building, flour milling, lumber milling, warehousing—built extensive structures along these waterways as well, often laced with railroad tracks. Architecturally undistinguished, these structures were still visual landmarks that identified a community’s economic base.