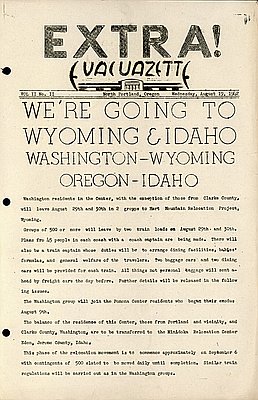 The August 1942 special edition of the Evacuazette, a newspaper published for people detained at the Portland Assembly Center in North Portland, provided news about their upcoming relocation to permanent camps in Idaho and Wyoming. The Portland Assembly Center was one of fifteen temporary holding facilities that housed Japanese Americans who had been evacuated from their homes following the issuance of Executive Order 9066, signed by President Franklin Roosevelt on February 19, 1942, to exclude Japanese Americans from security zones on the Pacific Coast during World War II. At the time the special edition was published, most of those imprisoned at the Portland Assembly Center had been there for over three months.

The edition confirmed that the transfer to the permanent relocation camps (as they were called) was imminent and provided instructions for the move. The paper also included detailed descriptions of both the Minidoka Relocation Center in Idaho and the Heart Mountain Relocation Center in Wyoming, the camps to which the majority of the Portland Assembly Center’s prisoners would be sent.

Almost four thousand Japanese Americans from Oregon and southern Washington lived in close quarters at the Assembly Center, which was little more than a renovated stockyard. Accurate information was important for those who were detailed there, and the community newspaper—often  little more than a few mimeographed sheets of paper—was a vital element of the regional and national news that was available to them.

Under editor-in-chief Yuji Hiromura, the staff of the Evacuazette covered the activities and news in the Portland Assembly Center as they would have in a small city. Published twice weekly from May 19 until August 25, 1942, the Evacuazette included articles about camp statistics, interviews with camp personalities, announcements about hygiene and health, social news, and a sports page that covered the camp’s sports teams. Each issue also contained an editorial that often served to help raise camp spirits.

Despite a vow in an early issue that the Evacuazette would “maintain its pledge as an independent free press; for, to, and by the people,” there were restrictions on the newspaper’s contents. News or editorials related to the war or politics were not allowed, nor were Japanese characters or language. To ensure that the staff of the Evacuazette did not violate the guidelines, a government public relations specialist reviewed and approved each issue.

Personal Justice Denied: Report of the Commission on Wartime Relocation and Internment of Civilians. Washington, D.C.: 1983.