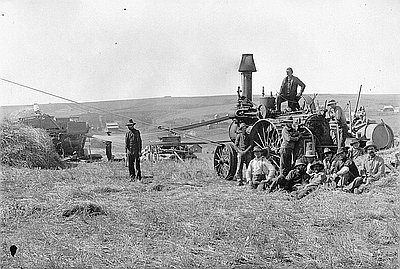 This photograph shows workers gathered around a steam engine during the wheat harvest in Sherman County. The photographer is unknown, as is the date of the photo, though it was probably taken in the 1900s or 1910s.

The 1880s marked an important turning point in the history of the inland Northwest. During this decade there was a shift in the focus of the region’s economy from livestock production to wheat production, particularly on the Columbia Plateau. Railroads played a key role in driving this economic change, as they linked the previously isolated interior with distant markets. In Sherman County, one of the most important lines was completed between Biggs and Shaniko in 1900. The independent Columbia Southern Railroad carried Sherman County wheat to Portland and other markets and helped create a population boom in the county, which grew from 1,792 people in 1890 to 4,242 people in 1910.

In addition to bringing thousands of new settlers into the region, the railroad transported the massive machines that were increasingly used to harvest and process wheat in the inland Northwest. Steam engines began powering wheat harvest and processing operations in the late 1880s. In the photograph above, a steam engine is being used to power a threshing machine, shown in the left of the photo partially obscured by the stack of wheat. Steam engines usually ran off of straw, wood, or coal, and could do the work of a dozen or more horses. A belt was looped to the pulley wheel of the engine then attached to the thresher which separated the wheat from the chaff. The separated wheat was then sacked and stacked—the sacked wheat can be seen in the middle of the photo behind the wagon.

Wheat harvesting and threshing was hard, dirty work, performed mostly by itinerant workers who traveled the region in search of temporary employment on farms and in mines, canneries, and logging camps. With the development of more advanced farm technology in the early decades of the twentieth century, however, the need for large work forces began to wane. Steam engines and threshing machines became obsolete with the adoption of the gas-powered combined harvester, which both cut the wheat and threshed it. The adoption of both combines and trucks allowed farms to grow in size, as just a handful of men could do work previously requiring dozens of workers.

Further Reading:
Brumfield, Kirby. This Was Wheat Farming: A Pictorial History of the Farms and Farmers of the Northwest Who Grow the Nation’s Bread. Seattle, Wash.: 1968.

This photograph shows harvest hands seated on sacks of grain near the northeastern Oregon town of Moro. It was taken by Moro photographer Will Raymond probably some time in the first decade of the twentieth century.

This photograph shows Mexican citizens weeding and thinning in an unidentified sugar beet field in Oregon, probably in Malheur County, during World War II. In 1942, the United States government negotiated with Mexico to import workers in order to alleviate a serious national agricultural labor shortage. The Mexican Farm Labor …

This 1943 photograph shows two teenage boys working with a woman to harvest wax bush beans on Sauvie Island. During World War II, many Oregon teenagers and women supported the war effort by working as seasonal laborers on area farms. They responded to a nation-wide labor shortage brought on by …