Workers at the Umatilla Ordnance Depot, 1943 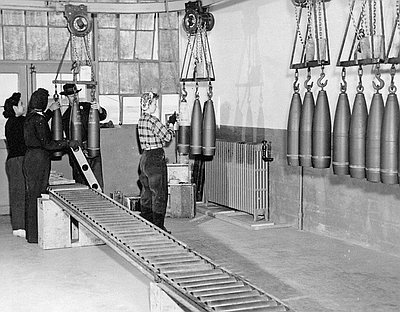 This photograph shows workers at the U.S. Army’s Umatilla Ordnance Depot stenciling and inspecting 155-millimeter artillery shells. It was taken by an Oregon Journal photographer in April 1943.

The U.S. Army Corps of Engineers began planning the construction of the Umatilla Ordnance Depot in the summer of 1940. A site near the eastern Oregon town of Hermiston was chosen because of its rail connections and its interior location, which would make it a more difficult target for enemy aircraft. Work on the facility began in January 1941 and was finished a year later. At the height of construction there were over 7,000 workers involved on the project, the centerpiece of which was 1,001 “igloos,” concrete buildings used to store munitions. The depot also had more than 200 miles of roads and 40 miles of railroad tracks, as well as a number of administrative buildings, machine shops, warehouses, and other structures.

The Umatilla Ordnance Depot did not manufacture munitions but it stored every kind of munition in the American arsenal, from .30-caliber small arms ammunition to two-ton blockbuster bombs. The 1943 article that accompanied the photograph above noted that “just how much in weight of explosives is stored at the Umatilla depot cannot be told, but it's a fair guess to say there’s enough, if it all could be properly planted, to just about tear Mr. Tojo’s war machine apart.”

During World War II, women workers made up a substantial part of the depot’s work force, the great majority of which was civilian. In 1943, 27 percent of the workers at the depot were women, and an Oregonian article noted that the “ordnance department hopes to increase the percentage, because they are doing a good job and because they are draft-proof.” Women also formed about a quarter of the work force in other important war industries in the region.

The Umatilla Ordnance Depot continued to store conventional munitions after the conclusion of World War II. It began to store chemical weapons in 1962, eventually accumulating approximately 12 percent of the nation’s stockpile of nerve and blister agents. Reports of leaking nerve agents in the late 1970s led many Oregonians, including Senator Mark Hatfield and Governor Vic Atiyeh, to call for the destruction of the depot’s chemical weapons stocks. In 1986, Congress ordered the Department of Defense to dispose of the nation’s remaining chemical weapons. The incineration of chemical weapons at the depot began in 2004 and is scheduled for completion in 2012.

This photograph, likely taken in May 1952 during the third annual Armed Forces Day parade in Portland, depicts a Buick convertible decorated to commemorate the 10th anniversary of women's service in the armed forces. Flags on the corners of the parade float represented components of the Navy, Marines, Army, and …