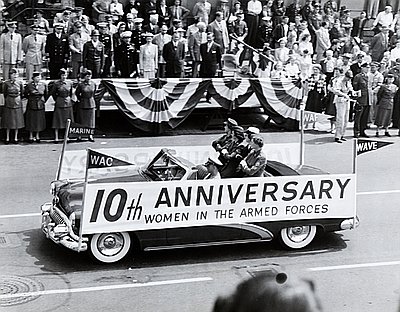 This photograph, likely taken in May 1952 during the third annual Armed Forces Day parade in Portland, depicts a Buick convertible decorated to commemorate the 10th anniversary of women's service in the armed forces. Flags on the corners of the parade float represented components of the Navy, Marines, Army, and Air Force. Prior to World War II, nurses were the only women to serve in the military in great numbers, although they did so without many of the privileges afforded to servicemen. The emergency of the Second World War prompted service branches of the U.S. military to enlist women in noncombatant positions.

The Women's Army Auxiliary Corps (WAAC) was established by Congress in May 1942. By November, enrolled female officers and enlisted women were paid the same as male army members of the same rank, although as auxiliaries they did not have official military status and did not receive many of the same benefits as their male counterparts. This changed in July 1943, when the Women's Army Corps (WAC) replaced the auxiliary program and adopted benefits that were similar to those of servicemen. In July 1942, a law enabled the Naval Reserve, Marine Corps Reserve, and Coast Guard Reserve to enroll servicewomen in separate sections. Shortly thereafter the Women Marines and the Navy's Women Accepted for Volunteer Service (WAVES) were established.

The U.S. government originally established the groups to meet the nation's needs during the crisis of war, but the participation of women in the military proved so indispensable during World War II that at its conclusion many pressed for permanent status for servicewomen. The Women's Armed Services Integration Act of 1948 granted that status to women.

1948 was also the year that Women in the Air Force (WAF) was established, resulting from the U.S. Air Force separating from the Army in 1947. Former Oregonian Jeanne Holm, who in 1971 became the first female general in the Air Force and in 1973 the first woman in the armed forces to become a major general, was also among the first women in Oregon to enlist in WAC during World War II. Early in her career, she switched to the Air Force, in part because she had witnessed obstacles to advancement for women in the WAC. Throughout her career, Holm worked to end discrimination against women in the military, from pressuring the Air Force to stop discharging women for pregnancy to advocating a greater variety of positions available to women.

This photograph was taken on July 4, 1889. It shows the Broom Brigade of Union, a town in northeastern Oregon’s Grande Ronde Valley.

Broom brigades were women’s organizations that spread throughout the United States during the 1880s. Mark Twain observed in his 1883 book Life on the Mississippi that “in …

This letter was sent to Margaret McLeod by American Red Cross Chairman Basil O'Connor in recognition of McLeod's service during World War II. McLeod was one of hundreds of Red Cross volunteers, many of them women, who provided services to American military personnel in Europe. McLeod saved this letter and …

Three million women had volunteered for the American Red Cross by the end of World War II, serving in various medical and support capacities throughout the world. The Red Cross was active in Oregon, and many women joined to help with the civil defense effort and to help medical facilities …

Workers at the Umatilla Ordnance Depot, 1943

This photograph shows workers at the U.S. Army’s Umatilla Ordnance Depot stenciling and inspecting 155-millimeter artillery shells. It was taken by an Oregon Journal photographer in April 1943.

The U.S. Army Corps of Engineers began planning the construction of the Umatilla Ordnance Depot in the summer of 1940. A site …