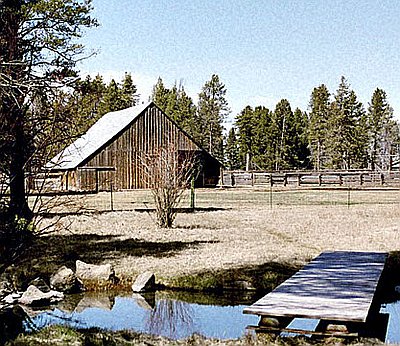 The first cattle were introduced to the Klamath Basin in the winter of 1856 by Judge F. Adams, a California rancher who grazed his herd near Keno, and Wendolen Nus, who pastured his stock near the Klamath River.  The first cattle ranch, however, was not established in the area until 1866.  The devastating winters of 1879-1880 and 1889-1890 were major setbacks for Klamath Basin ranchers.  The Southern Oregon cattle industry did not significantly recover until after the turn of the century.  The Klamath Basin experienced a rapid increase in livestock ranches in the early decades of the twentieth century due to the vast acreage of free range—land still unclaimed and not part of a U.S. national forest—and cheap land sold by the Klamath Indians.  In 1911, Dayton “Uncle Buck” Williams purchased the first portion of Yamsi Ranch from Native Americans.  Ultimately, the ranch—pictured here in 2001—grew to 5,000 acres.  Today, Yamsi Ranch, located in the mountains above Chiloquin, is a unique vacation destination for sportsmen and other outdoor enthusiasts.  The Hyde Family (Williams’ descendants) has received conservation awards for restoring river banks and replanting trees.  They strive for a world-class fishery and boast of raising their livestock naturally without hormones or antibiotics.

Between winter and fall in the Upper Basin country of lakes and marshlands, great quantities of water evaporate into the high desert skies. In the nineteenth century, before Klamath Project engineers drained the land and regulated its waters, lake shores rose and fell, revealing wagon tracks from previous years.

People and animals lined up for a livestock show on the grounds of the Portland Union Stockyards.  The first part of the twentieth century was a busy time at the stockyards.  One of the last livestock commission men recalled in 1967, that in its heyday, from the 1920s through the …