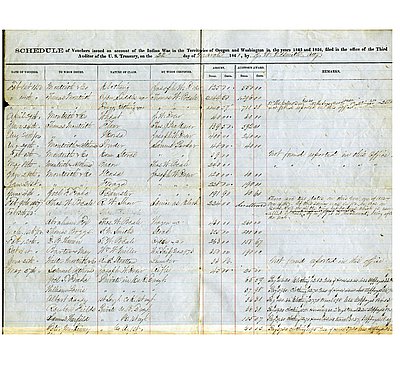 This document was created for the U.S. Treasury in 1861 as a record of reimbursement claims by people and businesses in Oregon and Washington who had provided services during the Indian Wars of 1855-1856, which included the Rogue River and Cayuse conflicts. R. J. Atkinson, the auditor of the federal treasury, was tasked with verifying the claims—a complicated assignment which involved documenting the costs of goods, services, and labors in the “local conditions” to make sure they reasonably matched the requests for reimbursement.

Congress passed a bill in August 1856 to appoint a commission to “ascertain and report” on the Indian war expenses incurred by Oregon and Washington Territories, whose local governments had paid volunteer forces “in trust,” expecting federal reimbursement. Territorial delegate Joseph Lane had lobbied hard for the 1856 bill, which had been met with some skepticism by members of Congress who suspected the territories were inflating the costs. This fear was supported by reports from General John Wool, head of the Department of the Pacific, who had reprimanded the local militias for violating treaty agreements and deliberately provoking conflict with Indians for the alleged purpose of war profiteering.

The bill did pass, however, and the U.S. Department of War in 1858 presented to Congress documentation in the form of vouchers, provided by the territories. Congress voted for an audit, which was completed by Atkinson and his commission in 1861. This document, recorded by attorney James W. Nesmith, a former superintendent of Indian affairs who, in 1861, was serving as Oregon’s senator.

The entries on the schedule cover a range of expenses, from clothing and food to weapons and salaries. The center column lists the original claim amounts in the form of scrip; the column to the right lists the amended valued amount, as determined by the audit. The Remarks column identifies gaps in accounting, expenses ineligible for reimbursement, and itemized costs and pay for volunteer soldiers.

The length of time between the passage of the compensation bill in 1856 and the completion of the audit in 1861 created an economic system in Oregon based on the exchange of war-related scrip. The territorial governments allocated money or used scrip (an IOU, of sorts, with the promise of future payment) to fund the control and violent submission of Native peoples. Volunteer militias and their material needs made up the bulk of the expenses; but any non-Native person or business could submit a reimbursement claim as long as it was connected to conflict with Indians. As a result, the Indian wars enriched many and flooded local markets with scrip, which often changed value, in part because speculators purchased it at a fraction of their face value in anticipation of a large payout by the U.S. treasury. As a result, many army volunteers no longer had possession of their original payment vouchers, creating a mathematical conundrum for the auditing commission attempting to determine back salaries. This voucher documents the efforts of at least one speculator—William Winlock Miller, Superintendent of Indian Affairs in Washington Territory—to make money from accounts he had purchased, rather than earned.

In the end, the U.S. Treasury paid out millions of dollars to Oregon, and businesses such as Montieth and Co. in Salem greatly profited, even after their inflated prices had been adjusted. This reimbursement system for state governments remained in effect through the nineteenth-century, and continues, in some form, to this day.

"Expenses of the Indian Wars in Washington and Oregon Territory." Letter from the the Secretary of War. Congressional Committee Materials, January 25, 1858.

This photograph by U.S. Army Lt. Lorenzo Lorain provides a striking view of Camp Day, a temporary encampment in the Klamath Basin used by the military over the summer and fall of 1860. It features members of Lorain’s Company L, Third Artillery division then attached to Fort Umpqua on the …

From Granville Arnold to his Father

The 1850s were easily the bloodiest decade in the history of southwestern Oregon. While relations between whites and Indians in the Rogue Valley had long been marked by conflict, ethnic violence in the valley came to a head in the summer of 1853. It is difficult to say whether any …

The Modoc War was fought over land. The Modocs refused to move from their traditional homeland to the Klamath Reservation, demanding instead …

On the Trail near the Salmon River

This sketch by Guy Howard depicts a pack train supplying the U.S. Army during the Nez Perce War of 1877. Guy Howard was the son and aid-de-camp of General Oliver Otis Howard, commander of one of the military divisions pursuing the Nez Perce Indians (Nimi’ ipuu).

War between the U.S. military …

This uniform, belonging to Col. Thomas R. Cornelius of Company “D,” First Regiment in the Oregon Cavalry Volunteers, is representative of those worn by soldiers in the Union Army during the Civil War. Although the regular army units were sent east when the war started, the federal government maintained volunteer …

Tecumtum (“Elk Killer”), also known as Chief John, was chief of the Etch-ka-taw-wah, a band of Indians who lived along the Applegate River in southwestern Oregon. Tecumtum’s band was the last group of Rogue River Indians to surrender to United States forces during the Rogue River War of 1855-1856.