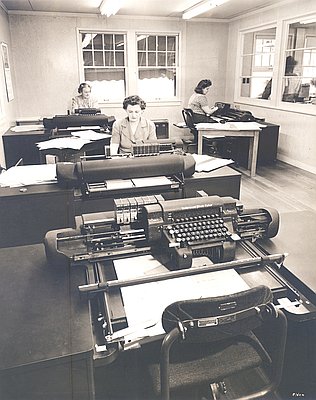 Oregon shipyards added hundreds, sometimes thousands, of new workers to their payrolls during World War II. Employers recruited women to fill positions typically held by men, mainly welding and pattern-making. But women also continued to work in jobs they dominated before the war, including clerical. The Albina Engine & Machine Works was formed in 1904, and was already repairing and building ships by the time the shipbuilding boom came to Portland in 1942. Albina expanded its workforce and production, and hired more women to work in its accounting and bookkeeping office. They kept track of employee records, payroll, supplies, contracts, production--all vital information necessary to run the business.

The typewriters these women are using were Underwood Elliott Fisher book typewriters, advertised as the most versatile typewriters on the market: "Writes anywhere a pen will, and on any size sheet of paper or book-page." Typists were able to move the typewriter around on a horizontal sheet of paper and line it up using the ruler attached to the front of the machine. This made it suitable for adding data to spreadsheets and other non-standard-sized paper. It also created a copy using carbon paper.