Tom McCall's copy of his speech to the Oregon Legislative Assembly, 1973 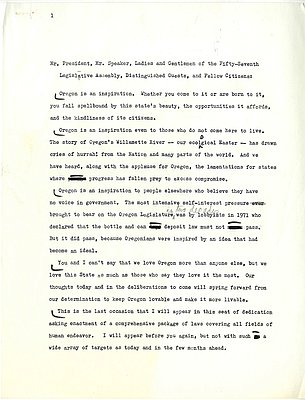 Governor Tom McCall gave this speech to the Oregon Legislative Assembly on January 8, 1973. Like all personal copies of his speeches, it is marked up with last-minute edits and what appear to be pause marks. McCall was a master speechwriter and speaker, and this document includes good examples of his rhetorical skill and persuasive—and poetic—voice:

“Oregon is an inspiration even to those who do not come here to live. The story of Oregon’s Willamette River—our ecological Easter—has drawn cries of hurrah! from the Nation and many parts of the world. And we have heard, along with the applause for Oregon, the lamentations for states where progress has fallen prey to excess compromise.”

The speech called on the legislature to take responsibility for the ecological and economic  health of the state, characterizing political action as acts of love for Oregon: “You and I can’t say that we love Oregon more than anyone else, but we love this State as much as those who say they love it the most.” He then outlined an ambitious legislative agenda that included tax and housing reform, beach and wildlife protections, and  fiscal responsibility.

As he wrapped up his address, McCall described the participation in the legislative process  in moral terms—a reflection of his belief that government and those who govern can be forces of good in people’s lives:

“In Oregon, our accomplishments of the next moments, days and months will be—as before—the result of the labors of people who gave the best of themselves, of public servants who put the common good ahead of personal or party interest.

“We will not accomplish all that we as individuals believe that we should, for there must be conciliation, mediation and compromise even upon the noblest of thoughts. Yet we will give the utmost of ourselves to fulfill rising expectations.”

This letter from Frances G. Scott to Governor Tom McCall was one of hundreds that poured into the governor’s office upon the defeat of the McCall Plan, a bold tax reform measure intended to stabilize funding of public schools and to offer property tax relief. After learning from the media …

Oregon GovernorTom McCall issued this eight-page press release in early September, 1970, during his successful re-election campaign. This is the first page of that statement.  In it, McCall defended his decision to use state money and employees to organize a three-day rock music festival at McIver State Park, in Clackamas …