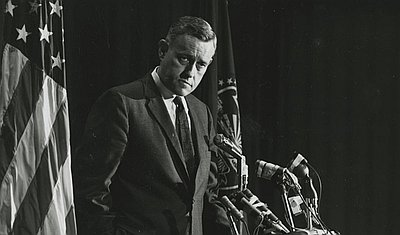 Thomas Lawson McCall finished his second term as Oregon's thirtieth governor in January 1975. The Portland City Club, a non-profit civic affairs group, asked McCall to present to its members (as he had several times before) on his time as governor. The event was recorded at the Benson Hotel in Portland, and the sound recording is now held by the Oregon Historical Society Research Library. LISTEN TO IT HERE.

The recording is uneven, both in speed and volume, and has been edited to remove sections that did not record properly. For the most part, however, McCall's voice and tone--including his well-developed sense of humor--are easily understood.

There is no comprehensive transcript, but an abbreviated account of the speech is below, including transcribed sections  which are particuarly compelling and help descibe McCall's philosophy of the role of government in Oregon.

The man introducing McCall at the beginning of the recording is likely City Club President George Dysart. The audio fades out during the beginning of McCall's speech on "A Blueprint for the Future," but becomes more robust a few seconds later at 2:13.

2:17 “Oregon should not try to be first for the sake of being first, or wait to be last because it might cost less. We take these actions to fill an Oregon need, I say in an introduction to the blueprint. Concluding, Oregonians with a heritage of independence are not inclined to wait for others to answer their own problems."

McCall follows this remark with a call for research by the state's intellectual talent on Oregon's resources in order to establish a state inventory of sorts, to act as "stored knowledge" for the benefit of Oregonians. This knowledge, once shared with the public, creates a more capable citizenry:

6:21 “The decision-making process should not be a method government uses absolutely to tell people what they should want. It should be a system of communicating, of explaining, of seeking public understanding. Because until the people can see the differences between things, their power to discriminate among choices is dangerously limited. Only if the people have all the information that possibly can be gathered can they become a society exercising truly a freedom of choice. So I regard information gathering in a coordinated way as one of the most obvious but obviously most neglected functions of government. With much better information, obviously people can make much better choices.”

7:16 "One other item that you know now today after I tell it to you will be in the Blueprint is a request that the search for equity in school finance and educational opportunity be continued. The defeat of the so-called McCall School Finance Plan obviously ranks as my most depressing moment in government service. Undoubtedly the opposition of the City Club had something to do with that defeat. I want to say to you in all candor that your rejection of the proposal was the worst time in my long recollection with an association with this club, which is the conscience of this city and much of this state, that the club let its collective pocketbooks affect its nervous system. Many of you will say, disagreeing with that, that it’s obviously a personalized assessment, so let’s not dwell on it because after all this is the season to be jolly. It is for me anyhow. Because Bob Straub has said he’s going to come back at you with a similar education finance plan as soon as he can get it ready. And he said it’s going to be in the Straub plan if it wins and the McCall plan if it doesn’t."

In 1973, McCall presented to the state legislature a revision in tax policy that he had determined would solve both the high property tax rates and the school budgeting crisis. He proposed to freeze property taxes, raise state funding of local schools from 33% to 90%, and make up the cost with a 30% income tax increase. In order to make the tax increase affordable, he reworked the tax brackets to shift the burden to the top bracket--a shift that essentially lowered taxes for 80% of Oregonians, making it the most progressive income tax in the country. Despite McCall's intense lobbying around the state and the support of many key Democrats, the measure lost in a referendum vote. The loss was a blow to McCall, who took it also as a referendum against his popularity and abilities as governor.

8:51: McCall goes over his "big moments" as governor for eight years. Some highlights:

His most traumatic moment was the State Penitentiary riot in 1968.

His most courageous moment was his veto of the Farm Labor Bill in 1971. The Farm Labor Bill (Senate Bill 677), written in part by the Oregon Farm Bureau, limited organizing by farm laborers by, among other things, banning boycotts and in-season strikes; taking the use of pesticides off the bargaining table; forcing union organizers to register with the state; allowing farmers but not workers to reject the findings in a binding arbitration; and prohibiting picketing grocery stores. Activists helped organize vigils on the steps and grounds of the state capitol; Ceasar Chavez attended.

His most audacious moment was when he criticized Vice President Spiro Agnew. By 1972, McCall’s relationship with Agnew had soured, primarily because of Agnew’s aggressive and partisan campaigning style. McCall described Agnew as “Nixon’s hatchetman” touring the country “like a man with a knife in his shawl.” He then publicly ridiculed Agnew's speech to the Republican governors in Sun Valley.

His most satisfying moment was Vortex--what he refers to as the "Governor's Pot Party."

His most dramatic moment was when he banned outdoor lighting. In 1973, the BPA warned the public of an impending energy shortage due to drought (which limited dam capacity) and oil shortages. McCall asked for a ten-percent decrease in energy use, and used his office as an example. All the water heaters and exterior lights on government buildings were turned off. When that failed to encourage private citizens to follow suit, he issued an executive order calling for all exterior advertising and landscape lighting to be turned off. The executive order had no real authority, but businesses complied to avoid McCall’s public admonishment.

16:29 McCall explains his famous quote: “Come visit us again and again. This is a state of excitement. But for heaven’s sake, don’t come here to live.”

“What it was, and I hope this is the last time I’ll have to explain it, was a conscientiously uttered statement, I became the highest ranking elected official up to that time, to challenge growth for growth’s sake. At the time, it was a statement thought to tarnish western hospitality, which we all know is next to God and motherhood. But in later times to has come to be recognized as a kind of a rallying cry among those who wish to plan now rather than to repent later. I think Oregon is full of those kinds of people, and certainly the mail from outside the state reflected we are not alone the approval rate of that position—from outside the state has been on the order of 30 to 1. Of course it isn’t wholly representative, but it does provide encouragement to those of us who believe in determining the total impact of growth, and even the total impact of the creation of wilderness, before decisions pro and con are made. The most critical battle in which I was involved was on the issue of land use you’ll remember the issue of 1960 initiative on the ballot to repeal Senate Bill 10 in 1970 when I was running for reelection. And I said if they throw that out please throw me out too, because I don’t intend to preside over the degradation of the state of Oregon."

19:14 “These and a host of other events, ladies and gentlemen, for when you consider them, you could say that my administration produced a classic continuing example of bullet-biting. In fact we’ve bitten the bullet so often, it’s a wonder we haven’t contracted lead poisoning.”

Note: At this point in the recording, the pitch and speed become very uneven.

24:54 “Success is built around the ability of the executive to pick the brightest, most courageous team ever assembled or any Oregon governor’s ever been allowed to assemble. And a team incidentally that possessed a greater percentage of legislators and ex-legislators any governor anywhere has ever put in his official family. So it was an attitude as well as a process that helped make these years so action-packed in Salem. And we came together in free-wheeling staff sessions held three or four times in the conference room.”

28:38 “I’d like to say that anything disappointing about gutting innovative government, is having the reactors who are barren of imagination and courage in their own right, that knock down everything you try, with the languid flick of a finger. Well, I could moan on and on, but I’d say that the thing I regret most perhaps was that I ought to stay at my post as governor because experienced governors, we’re indeed, the greatest balancer of the inequity that is developed in the federal system, vis a vis the three levels of government. And I always said that was where I should serve until my time ran out. However, as the last curtain falls on my elective career, I probably regret I didn’t run for the Senate maybe in 1972. We have the action office, it’s just that I hate to find myself at 61 with an enthusiastic following, relegated to the political bone yard.”

31:50 Question and Answer period. Audio fades in and out as people around the room ask questions.

Tom McCall's copy of his speech to the Oregon Legislative Assembly, 1973

Governor Tom McCall gave this speech to the Oregon Legislative Assembly on January 8, 1973. Like all personal copies of his speeches, it is marked up with last-minute edits and what appear to be pause marks. McCall was a master speechwriter and speaker, and this document includes good examples of his …

Oregon GovernorTom McCall issued this eight-page press release in early September, 1970, during his successful re-election campaign. This is the first page of that statement.  In it, McCall defended his decision to use state money and employees to organize a three-day rock music festival at McIver State Park, in Clackamas …