The arrival of Euro-Americans in southwest Oregon shattered Native societies. After brief but brutal warfare broke out between Natives and settlers in the Rogue River Valley during the summer of 1853, the U.S. government, represented by Oregon Superintendent of Indian Affairs Joel Palmer, and the Takelma, Shasta, and Dakubetede people, represented by Takelma leader Apserkahar, signed a treaty ceding most of the Bear Creek Valley in exchange for a reservation near Table Rock, on the Oregon coast.

Lack of food, a severe winter, and disease ravaged families on the Table Rock Reservation. In October 1855, when a group of Takelma returned to their village at the mouth of Little Butte Creek on the upper Rogue River, volunteer militia attacked them, killing twenty-three men, women, and children. Realizing that they were not safe, the Takelma fled the reservation for the Rogue River Canyon, attacking miners and settlers along the river from Gold Hill to Galice Creek.

Confronted by pursuing volunteer militia and regular army troops in the Rogue River Canyon, the Takelma inflicted heavy casualties on the poorly trained troops. The Battle of Hungry Hill, as it was known by the defeated, stood as a major victory for the Indians. In November, troops and volunteers again advanced into the Rogue Canyon, where nearly 150 men and their families were camped on the south side of the Rogue at Black Bar. The soldiers attempted to launch a surprise attack on the encampment, but the Indians heard the noise of their axes as they felled trees to build rafts. They fired on the exposed volunteers, defeating their pursuers.

There were several desperate battles, the last at Big Bend on the lower Rogue River. Then, in the spring of 1856, a combined force of nearly two hundred volunteers reached Ditch Creek on the north shore of the Rogue River and fired into the camp on the opposite shore. As many as thirty Indians died during the all-day assault at present-day Battle Bar. This loss, combined with hardships suffered during the long winter, forced the survivors to capitulate. Throughout that summer and the following winter, “licensed” hunters killed and captured the Natives who remained in the region.

In the winter of 1856 authorities marched four hundred Indians two hundred miles north from Table Rock to the newly established reservation at Grand Ronde in Yamhill County. Soldiers loaded the people that had surrendered at Big Bend onto a steamer at Port Orford and transported them, by way of the Columbia and Willamette Rivers and then overland to the Siletz Reservation, near the Oregon coast.

Forced to live in an unfamiliar environment among people with different backgrounds, southwestern Oregon Indians lived and died in despair. Disease decimated the Siletz Reservation population. The number of people counted at 2,026 in 1856 fell to 483 in 1900. In subsequent years, Euro-Americans forced their ideals of “civilization” on the survivors, and gradually the Native languages, oral traditions, and customs diminished.

In the twentieth century, descendants of these peoples struggled back from the edge of extinction to face a new era. After the federal government terminated their status in the 1950s, tribal members fought to reclaim some of the land allotted to them in the nineteenth century. Today, tribal governments have a good deal of control over their political and economic future and have developed programs to revive cultural traditions and landscapes of sacred value. Native peoples’ long identification with the land of their ancestors has inspired them as they face a modern world.

Native cultures were threatened during the quarter-century between the first white contact in the late 1820s and the discovery of gold in southwest Oregon in 1851. The contact period, as it is called, constitutes a distinct period in the area’s development, as interlopers invaded the Native homelands. Hudson’s Bay Company (HBC) employee Peter Skene Ogden led the earliest of many fur-trade explorations through the region in the spring of 1827. During this period of international competition for control of the Northwest, HBC stressed a policy of exhausting fur resources to discourage American trappers and ensure British control of the region. Ogden pondered the effects of trapping: “It is almost a sin to see the number of Small Beaver we destroy and to no purpose…this is the affect of Traps it spares neither Male or Female almost equal to death all are distroyed.”

For the next twenty-five years trappers and explorers traversed the north-south route that would become the Oregon-California Trail. In 1829, HBC trapper Alexander McLeod crossed into the Rogue drainage, and others passed through during the 1830s and 1840s, trapping, hunting, and clashing with Native inhabitants. In 1837, Ewing Young led a large cattle drive through the region, on his way from California to the Willamette Valley. In September 1841, George F. Emmons and members of the U.S. Exploring Expedition traveled through the Rogue River Valley on their way south from the Columbia River to San Francisco Bay.

In June 1846, five years before the first permanent settlers would reach southern Oregon, Lindsay Applegate passed through the area while seeking a safe wagon route through the Cascades for Willamette Valley-bound emigrants. “The Rogue River valley,” he observed, “seemed like a green meadow, interspersed with groves of oaks which appeared like vast orchards. All day long we traveled over rich black soil covered with rank grass, clover and pea vine.”

While each exploring party through the Rogue country widened the trails and reduced the animal population, their most lasting effect was the fear they instilled in the first inhabitants. 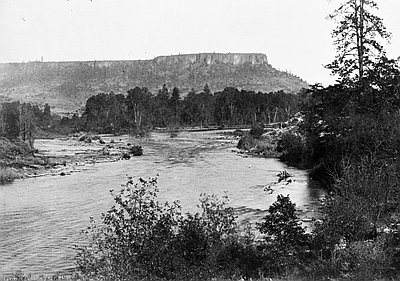 Flood and fire have shaped southwest Oregon in both damaging and beneficial ways. Periodic flooding typically occurred when warm, heavy rains and snowpack combined in a massive melt and runoff. Although flooding was likely a regular occurrence, riparian vegetation was probably much more extensive than it is today. This plant cover would have trapped sediment and slowed floodwaters, thereby reducing peak flows.

In 1848, two years after Lindsay Applegate traveled through the Rogue River Valley, the discovery of gold in Sutter’s Mill, California, brought prospectors through southwest Oregon. In 1850 and 1851, miners found gold on Josephine Creek, on the Illinois River, and on creeks near Jacksonville, Oregon.