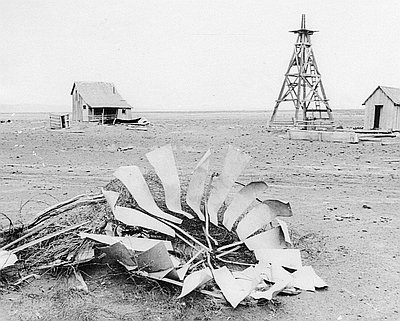 This photograph was taken in April 1963 by Oregon Journal photographer Al Monner. It shows an abandoned ranch in southeastern Oregon’s Christmas Valley.

During the 1910s, hundreds of families streamed into the high desert of southeastern Oregon seeking new homes. In 1909, the U.S. Congress passed the Enlarged Homestead Act in order to encourage the settlement of arid lands. The act offered potential settlers 320 acres for $10 if they occupied their claim within six months and improved it within five years. Many of those who responded to the government’s offer were city folk from the eastern United States tired of urban living. Like the settlers who had preceeded them, they came to the West looking for a new life.

But life in the high desert was harder than most had expected. Historical geographer Raymond Hatton interviewed several homesteaders in the 1970s, including Louise Lane, who moved from Philadelphia to Fort Rock Valley with her parents in 1911. Lane remembered that “Mother had never baked bread before moving to the desert. Back East, if you wanted bread you bought it at a store.” Her father was also largely unprepared for an agricultural life. “Dad knew little about farming,” Lane remarked, “but he managed to raise a crop.”

The basics were hard to come by in the high desert. Lumber for houses and barns often had to be brought in by wagon from dozens of miles away. Water was even scarcer than lumber, and most settlers had to dig their own wells. Lane’s father dug eighty-five feet into the ground before he struck water.

Despite the difficulties, many settlers enjoyed success during their first years of homesteading, benefiting from the exceptional weather that the region experienced in the early 1910s. That changed, however, when a serious drought hit the region during the second half of the decade. In 1917, Fort Rock Valley received a mere 4.45 inches, not nearly enough to grow a crop. Lane remembered that “the people had nothing to live on. They starved.”

In addition to the drought, the expected railroad link never materialized, leaving the homesteaders isolated from the rest of the world. They began drifting away as quickly as they had come, many taking advantage of the jobs created by World War I. Some homesteaders remained, however, including Lane’s family. “We survived,” she noted, “because of Mama. She was the head of the family.”

Lake County’s Christmas Valley Lodge is shown in the photograph above. It was taken by an Oregon Journal photographer in June 1962.

In 1960, the flamboyant ranch-buyer and land speculator Phil Pittman (who, with Reub Long, had worked tirelessly to bring electrical power to the Fort Rock/Christmas Lake section of …

This photograph shows George Rodman spreading irrigation water over his farmland near Culver on May 18, 1946. Rodman was the first farmer to receive water from the Deschutes Irrigation Project.