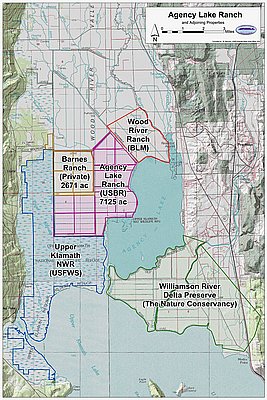 Upper Klamath Lake, at 142 square miles, is Oregon’s largest fresh-water lake.  It is fed by the Williamson and Sprague Rivers and several small creeks and springs, and is the source of the Klamath River, which flows from Oregon into Northern California and out to the Pacific Ocean.  According to the U.S. Geological Survey, Upper Klamath Lake is naturally eutrophic, which means it contains a high level of nutrients, supporting diverse plant and animal communities.

In the last 60 to 80 years, however, the Upper Klamath Lake has become hypereutrophic, meaning its nutrient levels, especially phosphorus and nitrates, have become so high as to promote dangerous levels of blue-green algae, degrading the lake’s water quality and depleting oxygen levels necessary for fish.  According to federal, state, and local biologists, the blue-green algae have taken over the lake, creating a severe situation for the Lost River and shortnose suckers.  These fish, found only in Upper Klamath Lake and the Klamath River system, were listed as endangered in 1988.

Land-use changes, dating back to non-Native settlement in the mid-nineteenth century, have significantly altered Upper Klamath Lake and its surrounding wetlands.  These wetlands would normally help cleanse the Klamath water system by acting as a sump for water overflow during rainy seasons.  Beginning in the 1930s, however, they have been drained for irrigation, agricultural land, and grazing.  Streams flowing into Upper Klamath Lake, consequently, act more like drainage ditches, transporting nutrients directly into the lake from Klamath Basin farmlands rather than being filtered first by the wetlands.  Many public and private groups now recommend returning some farmland back to wetlands.  Since 1980, the Nature Conservancy has led the effort to improve the health of the Klamath water system.  The Nature Conservancy, Bureau of Reclamation, Bureau of Land Management, U.S. Fish and Wildlife Service, PacificCorp, the Klamath Tribes, and local farmers have purchased thousands of acres in the Upper Klamath Basin for wetland restoration.

Construction of the Klamath Reclamation Project, a federally constructed and managed irrigation system, began in 1906 with the building of the Main Canal, or “A” Canal, and tunnel. Stretching 3,300 feet, the tunnel can deliver up to 1,150 cubic feet of water per second from Upper Klamath Lake to irrigate …

The Klamath Basin National Wildlife Refuge complex includes the Upper Klamath, Klamath Marsh, and Bear Valley Refuges in Oregon and the Lower Klamath, Tule Lake, and Clear Lake Refuges in California.  It has been estimated that nearly 80 percent of the migratory waterfowl in the Pacific Flyway pass through the …