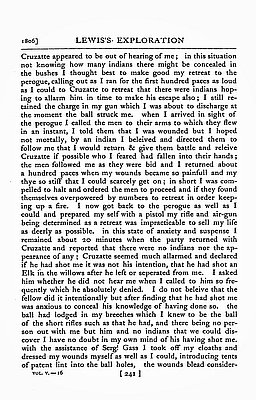 This excerpt from the journal of Meriwether Lewis describes a hunting accident on August 11, 1806, during which Lewis was shot by one of his men, Pierre Cruzatte, a one-eyed, half-French, half-Omaha private known for his skill as both a boatman and a fiddle-player.

In July 1806, the Corps of Discovery divided into three groups while making their way back towards the United States. Captain William Clark led one contingent of men down the Yellowstone River, while Sergeant John Ordway led a second contingent down the Jefferson and Missouri rivers. Lewis led the third group to the Marias River, hoping to determine its northern extent.

Lewis describes how he and Cruzatte left the rest of the party to hunt in the thick willows along the Missouri River. The two opened fire on a herd of elk, killing one and wounding another. As the buckskin-clad captain was in the process of firing a second shot, he felt a bullet pass through his left buttock. The wound, Lewis wrote, “was very severe.” He assumed that Cruzatte, who was near-sighted in his only good eye, had mistaken him for an elk. Lewis called out to the private several times, and when Cruzatte failed to answer, he became “preswaded that it was an indian that had shot me.”

Lewis limped back to the perogue, shouting at his men to ready themselves against a possible Indian attack. Cruzatte showed up about twenty minutes later and “seemed much alarmed” when he saw that Lewis had been shot. The captain understood that Cruzatte had not shot him on purpose, but Lewis believed that “after finding he had shot me was anxious to conceal his knowledge of having done so.”

Lewis was fortunate in that the wound, though painful, was not as severe as he had first thought. The .54-caliber ball had passed clean through without hitting a bone or an artery, which could very well have been fatal. Nevertheless, it was the most serious injury any of the Corps members sustained over the course of their two-year exploration of western North America.