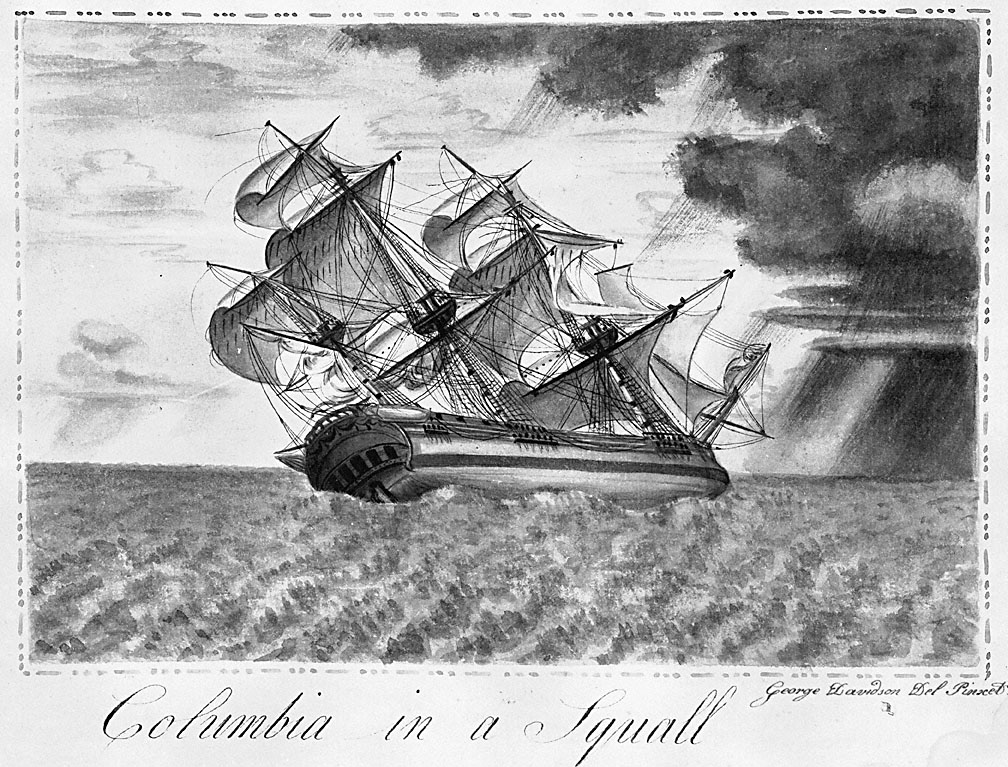 When European sea captains first glimpsed the Pacific Coast, the vast and dense forests caught their attention. British trader John Meares, who sailed the Northwest Coast in 1788, described the land along the Olympic Peninsula as “wild in the extreme...immense forests covered the whole of it within our sight down to the very beach.” On his 1778 visit to Nootka Sound, Capt. James Cook ordered his crew to fell trees for masts, making them the first white loggers in the Northwest. In 1787, Robert Haswell, the first mate on American trader Robert Gray’s ship, recorded his impression of the landscape near Cape Blanco: “beautyfully diversified with forists and green verdent launs.” He also speculated that “this Countrey must be thickly inhabited by the many fiers we saw in the night and culloms of smoak we would see in the day time.”

On April 27, 1792, the fleet of British explorer George Vancouver sailed past the entrance to the Columbia and noted the change in the character of the water that signified the mouth of a river. Vancouver, however, was under orders “not to pursue any inlet or river further than it shall appear to be navigable by vessels of such burthen as might safely navigate the pacific ocean.” He decided to drop the matter and continue north.

Two days later he encountered a ship, the first he had sighted in eight months. It was Captain Gray, on the Columbia Rediviva, heading south from his wintering port on Clayoquot Sound, where he had worn out his welcome with the people there and had ordered a village destroyed shortly before he departed. Gray told Vancouver’s officers that on his way north he had passed a river’s mouth at the latitude of 46° 10', with a flow so strong he could not enter. Vancouver remembered the spot, but even after hearing Gray’s account, he dismissed the river, if such it was, as being too small to be navigable. Two weeks later, on the morning of May 11, 1792, Gray sailed over the Columbia River bar in five to seven fathoms of water and into the broad expanse of Baker Bay. Gray named the river Columbia after his ship.

In January 1803, President Thomas Jefferson selected Meriwether Lewis to lead an exploratory expedition to the Far West. By the spring of 1804, when Lewis and William Clark leave St. Louis and head west up the Missouri River, the United States had purchased a claim to a vast territory from the Mississippi River to the Continental Divide—the Louisiana Purchase.

Lewis and Clark were on a scientific expedition. President Jefferson had directed the explorers to take careful notes of the flora, fauna, and inhabitants of the country they would pass through. Members of the Corps diligently collected specimens of the plants and animals they saw along their route, including those they encountered during their sojourn at Fort Clatsop at the mouth of the Columbia during the winter of 1805-1806.

Among the many plants they catalogued were 176 that were new to science, some of them familiar to people on the coast: vine maple, bigleaf maple, Pacific madrone, white and red alder, salal, bracken fern, evergreen huckleberry, Sitka spruce, mountain hemlock, western white pine, and grand fir. One of them, Oregon grape, was named the state flower almost a hundred years later.

Lewis and Clark took copious notes about the Native people on the river and the north coast. They reported in their journals that their relations with the people of the lower Columbia were often tense, especially during the Corps’ long winter at Fort Clatsop, near present-day Astoria. In the journals, the captains also commented on the Natives’ technology and their skillful use of natural resources. In their journals, drawings, and maps, Lewis and Clark brought back information about the landscape and the peoples of the Pacific Coast that was new to science.

In May 1810, Nathan Winship, captain of the Albatross, sailed from Boston to establish a settlement at Oak Point on the Columbia, forty miles upriver from Fort Clatsop. The Winship party began building a fort, but a late spring flood washed out their garden and forced them to move a quarter-mile downstream. Threats against them from local Natives finally prompted the Winships to abandon the venture.

New York tycoon John Jacob Astor made the next attempt at settlement. Astor incorporated his Pacific Fur Company in 1811 and sent two parties to the Pacific Coast, one overland and the other by sea aboard the Tonquin, commanded by Capt. Jonathan Thorn. The ship crossed the Columbia bar in March 1811, a rough crossing that took eight lives.

The Astorians settled on a heavily wooded site at Smith Point, on the river’s south shore, the location of present-day Astoria. Alexander Ross, a Pacific Fur Company clerk, who was accustomed to the spare hills of his native Scotland, wrote: “towards the south, the impervious and magnificent forest darkened the landscape, as far as the eye could reach.” The site was “studded with gigantic trees of almost incredible size, many of them measuring fifty feet in girth, and so close together, and intermingled with huge rocks, as to make it a work of no ordinary labour to level and clear the ground.”

The Astorians’ venture was ill fated from the start. Captain Thorn was killed by Natives on Vancouver Island, and his ship was blown up after he physically accosted a local leader. The overland party, known as the Astor Expedition or the Hunt Party, was plagued by hunger and illness and split up in the Snake River canyon. The main group arrived at Fort Astoria in February 1812; Ramsay Crooks and John Day staggered in three months later, naked and nearly starved.

Despite Astor’s setbacks, the establishment of Fort Astoria became part of the United States’ later claim on the Oregon Country, which were resolved in the Oregon Treaty with Great Britain in 1846.

This is a copy of a sketch made by William Clark in February 1806, while Expedition members were at Fort Clatsop near the mouth of the Columbia River. … 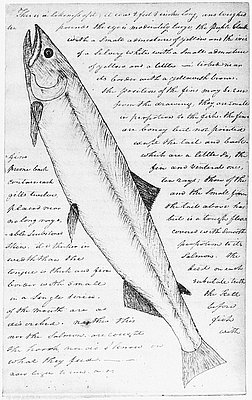 Sometime around the summer of 1944, ten-year-old Douglas Owen found the 120-pound basalt rock shown above near the town of Bates, located about thirty miles northeast of John … 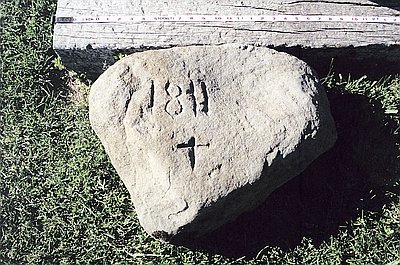 This painting shows the Columbia Rediviva heeling to the side as it approaches a squall. It was painted in 1793 by amateur artist George Davidson, the Columbia&rsquo;s painter. … 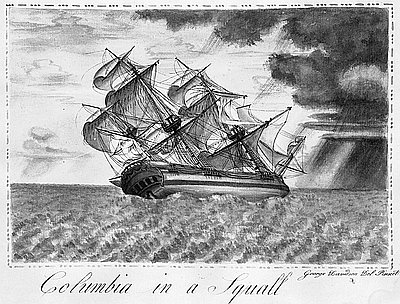