Because the restless molding of land by water tends to obliterate traces of human history, there is no archaeological evidence to document precisely how long the Oregon Coast has been inhabited. With its mild climate, abundant and easily gathered food and fiber, and waterways for transportation, it is a hospitable place to live. Moreover, nearly all the language families of North America are represented in the diverse tongues spoken by Northwest coast peoples, suggesting that the region may have been settled earlier than the rest of the continent.

At the time of their first contact with whites, the Clatsop, a band of the Chinook, lived around the mouth of the Columbia and upriver as far as tidewater. South of Tillamook Head were the Tillamook and Nehalem Tillamook—rendered by Meriwether Lewis and William Clark in their journals as “Kilamox” and “Killamuck”—whose homeland extended to the mouth of the Salmon River north of present-day Lincoln City. Farther to the south were the homelands of the Siletz, Yaquina, and Alsea peoples, who lived in villages along the ocean and around the bays of the rivers now named after them. The Kalapuya people resided in the foothills of the Cascade Range.

The Siuslaw and Lower Umpqua peoples lived from Heceta Head south to the dunes around present-day Reedsport. Around Coos Bay lived the Hanis Coos, the Miluk Coos, and the Upper Coquille. The Lower Coquille lived around the mouth of the Coquille River, and south to the mouth of the Smith River in northern California lived the Coastal Rogue, also called Tututni, and the Chetco.

These peoples were mostly isolated from one another by the rough country between the river mouths, and the Coast Range separated them from the inland peoples. They spoke many languages from very different linguistic groups—Alsea/Siuslaw, Athapaskan, Chinookan, Coosan, Kalapuyan, Klickitat, Molala, Shastan, Takelma, and Tillamook. Nevertheless, the geography of the region gave the peoples of the Oregon Coast an important similarity: they looked primarily to the sea and the forest for their livelihood and culture.

People lived in permanent villages of extended families, clustered around coastal rivers and estuaries that offered shelter from storms and a variety of animals and plants. They built a variety of structures, including semi-subterranean dwellings and cedar plankhouses. Each village was autonomous, with its own political authority. People traveled by trail along the beaches and over the headlands and established trade routes and networks that enabled them to sustain contact with neighbors.

People in many communities traveled by canoe, using large, high-prow, Chinook-style canoes for deep water, ocean-going transportation and traveling in shovel-nosed river canoes in slower, shallower waters. In the spring and summer, canoes transported people to places where they could harvest crops, fish, and hunt. Canoes also enabled communities to participate in regional trade networks. The use of canoes stopped in the mid nineteenth century after the tribes were removed from their ancestral lands to federal reservations, as people could not leave the reservations without special permits. The introduction of horses also altered how many people moved from place to place. Many communities were without a canoe culture for more than a hundred years, and many tribes have been working to revive those traditions.

Native communities along the coast and in the lower Columbia River relied heavily on fish. While salmon was important, it was not the only fish harvested by tribes. Anthropologist Virginia L. Butler and archaeologist Michael A. Martin report that Native fishers subsisted on a variety of fish, including eulachon, sturgeons, lampreys, minnows, and suckers, in addition to salmon. Fisheries were seasonal, with specific species caught between the early spring and late fall at specific sites throughout the region.

Fishers used a variety of strategies and technology to catch, process, and preserve the fish, and communities practiced rituals to ensure that the fish would return to the rivers year after year. The Tututni and people in other Athapaskan villages, for example, built driftwood bonfires to guide and welcome the annual runs of chinook salmon; the light and smoke from the fires were said to be visible up and down the Oregon Coast. Men danced around the pyres, singing songs to encourage the salmon to return. Once the salmon harvest began, the Tututni and many other Oregon peoples conducted the First Salmon ceremony, a tradition that continues in the twenty-first century in many Native communities. Cooking the ritual first salmon over an alder fire, each villager received a piece of the fish as religious leaders and community members offered thanks for the salmon’s return. Coastal people also gathered food from the beaches and salt marshes and the edges of the forest, including shellfish, berries, acorns and other nuts, seeds of wild grains, and roots and bulbs such as the camas and wapato. They also hunted deer, elk, and waterfowl.

Food was so abundant that, unlike the inhabitants of some harsher environments inland, the coastal people had enough to eat year-round. The relative lightness of the work required to survive gave rise to a socially stratified, wealth- and status-conscious society. Some of the coastal groups in present-day Oregon were among the wealthiest of pre-contact complex hunter-gatherer communities in America.

Slavery was practiced in most of the region, with the practice more common among the Chinook and Clatsop and, to a lesser extent, the Tillamook societies. Slaves were captured, traded, gambled, purchased, and given away by their male or female owners, who had near-absolute power over their lives. For some, servitude was permanent and hereditary, while others were enslaved to pay debts and could eventually be released.

Peoples on the Northwest Coast displayed artistry in their clothing and tools, and they were particularly skilled woodworkers. Wood, especially cedar, spruce, fir, and pine, was the principal material for houses, canoes, and hunting and fishing equipment. Harder woods like alder, ash, maple, and yew were used to make smaller items, such as containers. Lewis and Clark reported that the Clatsop used wedges of seasoned crabapple wood to split cedar and spruce boards, carved canoes from logs, wove baskets and hats from shredded cedar bark and beargrass, and made bows and arrows out of cedar and elk sinew. On January 29, 1806, William Clark described the utility and beauty of the hats worn by local people:

Maney of the nativs of the Columbia were hats & most commonly of a conic figure without a brim confined on the head by means of a String which passes under the chin....these hats are made of the bark of Cedar and beargrass wrought with the fingers So closely that it Casts the rain most effectually....on these hats they work various figures of different colours, but most commonly only black and white are employed. these figures are faint representations of the whale, the Canoes and the harpoonners Strikeing them. Sometimes Squares dimonds triangle &c.

In 1700, a massive earthquake and tsunami struck the coast, dramatically altering the coastline, estuaries, and low-lying river tidal areas; affecting subsistence resources and technologies; and destroying housing, storage shelters, and other structures as well as nets, fish weirs, and baskets. Oral tradition has preserved some descriptions of earthquakes and tsunamis, and stories told for generations by coastal Native peoples captured the devastating events.

In The Coming of the Spirit of Pestilence, anthropologist Robert T. Boyd presents a conservative precontact population estimate of 180,000 Native people in the 1770s; that figure declined to 35,000 to 40,000 by the 1850s. He calculated a precontact population of 22,800 along the south coast, which included modern-day Oregon. The number of Indians on the coast plummeted to 2,966 by the 1850s. Smallpox was most likely introduced to the coast in 1775 by crewmembers of the Santiago and the Sonora, two Spanish ships captained by Bruno Hezeta and Juan Francisco de la Bodega. The explorers encountered Indians at the mouth of the Trinidad River (in modern California) as well at the Quinault River (in modern Washington). In March 1806, Lewis and Clark visited Cathlapotle, a major Chinookan village and trade center about eighty miles upriver, at the confluence of the Columbia, Lake, and Lewis Rivers. They estimated the village population to be between 900 to 1,400 people. Occupied since 1450, the village was abandoned in the 1830s.

The Native population throughout the Northwest declined rapidly between the 1770s and 1850s because of introduced European diseases such as smallpox, measles, malaria, and influenza. With no prior exposure to such diseases, Native peoples had no natural immunity against the pathogens that cause them. The diseases spread first from whites to Natives with whom they came into contact and from them, via trade networks, to people who had never seen a white person.

An outbreak of malaria in the 1830s was especially devastating to both Native and white populations. According to anthropologist Robert T. Boyd, the “fever and ague” epidemic was “the single most important epidemiological event in the recorded history of what would eventually become the state of Oregon.” Such diseases decimated Native communities, with tribes on the Northwest Coast losing an estimated 80 percent of their populations, or 150,000 people. The population of the Siletz confederation, for example, declined from 52,000 in the 1770s to 4,200 in the 1850s, a loss of 92 percent in less than a century. 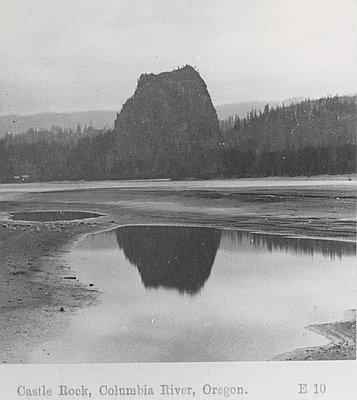 This photograph was taken by John F. Ford, a photographer who had commercial studios in Portland and Ilwaco, Washington, between approximately 1900 and 1914. It shows a group of Chinook Indians using a seine to catch salmon. Writing on the back of the photograph identifies the location as Sand Island, …

This map was drawn in 1884 by the ethnologist James Owen Dorsey based on information given to him by É-ne-á-ti, a Tututni Indian living on western Oregon’s Siletz Reservation. It shows some of the major Indian village sites in southwestern Oregon prior to white resettlement of the region in the …

Because the Pacific Northwest was a focus of international commerce in the late eighteenth and early nineteenth centuries, people of many different cultures came to or passed through the region. The earliest Europeans to stay for long on the northern Oregon coast were the Scottish, English, French, and American people attached to British and American fur-trading enterprises.

NEXT SECTION
Farming and Fishing

Under territorial and federal land-claim acts, white farmers took possession of large tracts of land around the lower banks of the coastal rivers and their estuaries. Dairying, the earliest and most important farming enterprise in Clatsop County, was well established by 1845.