Under territorial and federal land-claim acts, white farmers took possession of large tracts of land around the lower banks of the coastal rivers and their estuaries. Dairying, the earliest and most important farming enterprise in Clatsop County, was well established by 1845. Dairy farmers diked and drained the marshy tide flats around Young’s Bay to grow hay and make pasture for their cows. The drained wetlands was good hay-growing land; one settler reported a yield of six tons per acre from his diked tide flats, better than the expected three to five tons. The first cows arrived in Tillamook soon after Euro-American settlement there, driven in from Clatsop County by Henry W. Wilson, after whom the Wilson River was named.

The lush grasses along the banks of coastal rivers made a good environment for raising cattle, and the first cows were brought into Coos County in about 1853. Dairy farmers established a cooperative creamery in 1892, supplying local demand for milk, cream, butter, and cheese. Coos County farmers also grew grains (oats, wheat, barley, and corn), vegetables, and hay on the marshy bottomlands along the Coos and Coquille Rivers. Cranberries, an important commercial crop by the twentieth century, were introduced to Coos County in 1885.

The abundance of salmon in Oregon’s coastal rivers amazed the first white settlers. Their awed response is preserved in the eponymous tale of returning salmon choking the rivers so thickly that one could walk across the water dry-shod on their backs. Like Native peoples, the earliest Euro-American settlers caught salmon for their own subsistence, along with sturgeon, eulachon, and shellfish such as crabs, clams, oysters, and shrimp.

A commercial oyster fishery developed in Newport in 1863 supplied the San Francisco market. Oysters were also commercially harvested in the Coos estuary, and oyster farming began there in 1874. The coastal oyster industry lasted a few decades, until the native stocks were nearly depleted. It was revived in the twentieth century with a species imported from Japan.

Commercial salmon fisheries developed in the 1860s, supporting early salmon-canning enterprises in Astoria, Tillamook Bay, Yaquina Bay, and Gold Beach. By the turn of the twentieth century, commercial fishing was an important part of the economy of every major coastal town. Fishermen supplied crab, black cod, halibut, albacore, pink shrimp, and several varieties of rockfish to packers and fresh markets, both locally and inland. Sport fishing later joined commercial fishing as an important part of the coastal economy; in the twenty-first century, it is a mainstay of the economies of Depoe Bay, Newport, Waldport, Florence, Winchester Bay, Gold Beach, and Brookings.

The Northwest salmon-canning industry got its start in 1866, when Hapgood, Hume and Co. built a cannery on the Columbia River at Eagle Cliff, on the Washington shore. Their first season’s pack on the Columbia, four thousand cases of chinook salmon (each case consisted of forty-eight one-pound cans), fetched $64,000.

Canned salmon was cheap, nourishing, tasty, and nonperishable, and it found a ready market in the eastern United States, Britain, and Australia. Hapgood, Hume marketed its fish under the labels Crown, Globe, Royal, and Oregon. By 1881, salmon canning was a major industry in the Pacific Northwest, with Astoria, by now the largest town on the Oregon Coast, as its center. At the industry’s peak, thirty-nine canneries operated on the Columbia and many others on Oregon's coastal rivers.

The booming new enterprise needed labor, which was furnished largely by immigrants. Scandinavians, who had left their economically depressed homelands in search of a better life, dominated the fishermen’s ranks. Swedish and Finnish fishermen (and also loggers and sawmill workers) moved to Astoria, Coos Bay, and other coastal communities. Still standing in Astoria is Suomi Hall, a long-time gathering place for Finnish immigrants, now the site of folk festivals organized by their grandchildren and great-grandchildren.

Most cannery workers in the late nineteenth century were Chinese. Chinese men had been coming to the western United States since the 1850s to work on the railroads and in the mines in southern and eastern Oregon. As the economic depression of the 1870s curtailed that work, some of the displaced workers were drawn to canneries in Astoria and Portland.

In 1872, facing a labor shortage, George Hume was the first to hire Chinese to work in a Columbia River cannery. Other owners followed his lead, and within four years only one cannery in the area had an entirely non-Chinese crew. By 1881, more than four thousand Chinese were employed in thirty-five Columbia River canneries. Most of them were recruited, managed, paid, and sometimes abused by labor contractors.

Chinese laborers played a pivotal role in the developing economy of the West Coast. Most had immigrated as single men who tended to settle in urban Chinatowns, partly to avoid anti-Chinese bigotry. During economic downturns, such as the hard times of the 1880s, the racial prejudice of some Euro-Americans was fueled by fear of losing jobs to immigrants, and a wave of anti-Chinese violence swept through the region.

Some Chinese workers made attempts to unionize, but they were thwarted by companies’ vigorous anti-union efforts and weakened by declines in their numbers after Chinese exclusion laws were passed in the 1880s and 1890s. By 1900, the canning industry began to hire Japanese, Filipino, Mexican American, and Native American workers, including women and children.

Fishermen were more successful at unionizing. The Fishermen’s Union in Astoria, for example, was strong enough to call a strike in 1896 to protest the low price that canneries were paying for fish. From the strike emerged the Union Fishermen’s Cooperative Packing Company, started by 191 Finnish and Scandinavian fishermen to gain some measure of control over their working conditions. Some of these workers had brought with them from their home countries an ideology of dissidence and experience in union organizing, and Astoria became an early locus of socialist activity. Chinese laborers were excluded from the union, as well as from nearly all unions in the Pacific Northwest.

Intense competition and more efficient fish-catching technologies rapidly depleted the salmon runs in the region. The Columbia River salmon pack peaked in 1895, with 635,000 forty-eight-pound cases. The unrestrained fishery, employing such technologies as fishwheels and gillnets, had harvested returning salmon in unsustainable numbers, and the result was a rapid decline in the salmon population in coastal river systems.

Automation also speeded production, leading to the canneries’ increased appetite for fish and eventually reducing the need for labor. The new technologies were slow to take hold on the lower Columbia, where owners were reluctant to invest in expensive and sometimes experimental machines, especially when they had plenty of relatively cheap labor. But as heavy harvests coincided with the increasing scarcity of Chinese workers, owners gradually began to use automated gang knives to cut fillets and machines that packed and soldered the cans.

The best known of the innovations was called the Iron Chink, a fish-butchering machine first tested in 1903. Its name was a derogatory reference to Chinese laborers, and its use was marketed frankly as a way for owners to displace Chinese labor and encourage “white” work. Still, many Columbia River canneries continued to rely on skilled hand butchers, who wasted less meat and could handle different sizes of fish. It was not until World War I, which brought government contracts for uniformly packed, low-grade canned salmon, that the automatic butchering machine was widely used. 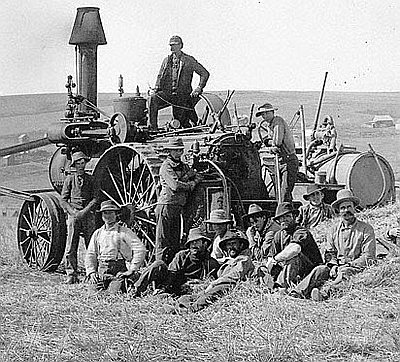 This undated photograph of two men standing on the deck of a stationary fish wheel was taken by Benjamin A. Gifford, a professional photographer working from Portland, Oregon.

While archaeologists have dated Columbia River salmon harvests back 10,000 years, it wasn’t until the growth of the salmon canning industry on …

These labels show three different brands of Columbia River salmon sold during the late nineteenth and early twentieth centuries. At the top is the Otter Brand, packed by The Dalles Canning and Packing Company, located in Rockfield, a former train stop that is today part of the City of The Dalles. In …

The Isaac Lee Patterson Bridge across the Rogue River on Highway 101 at Gold Beach is depicted above at the time of its completion in 1931; it was dedicated on May 28, 1932.

Through the end of the nineteenth century, the rugged Oregon coastline could be walked on a network …

This document is an excerpt from an 1894 report by the U.S. Commissioner of Fish and Fisheries Marshall McDonald. It describes the decline of salmon in the headwaters of the Columbia River during the late nineteenth century.

This undated photograph shows various sizes of Tillamook cheddar cheese on display. It was taken by Portland photographer Wesley Andrews, perhaps in the 1940s.

The photograph shows the cannery building and net drying racks of the Union Fishermen’s Co-Operative Packing Company in Astoria in the early 1920s. The salmon canning industry developed along the Oregon Coast and on the Columbia River in the late nineteenth century, with Astoria at its center. Canned salmon was …

NEXT SECTION
Mining, Lumbering, and Shipbuilding

The southern Oregon Coast between Coos Bay and Gold Beach experienced an early and mostly unproductive mid nineteenth-century gold rush, which gave Gold Beach its name. The gold fever started in the winter of 1853, when hopeful panners flocked to the black sands of Whiskey Run Creek south of Coos Bay.