Starting a New Century: The Lewis and Clark Centennial Exposition, 1905

A Helping Hand from Washington

Farms, forestry, factories, and railroads meant that Oregon in the early twentieth century was a great place to seek a living or a fortune. There may have been no discernable frontier line across the continent after the 1890s, but there were plenty of frontier districts in the Northwest—landscapes waiting for homesteaders and investors to risk their futures. Indeed, we can describe the first two decades in the twentieth-century West as the era of the federally sustained frontier. New federal agencies staged a sort of inventory clearance of federal lands with increasingly generous homestead terms and promotional pamphlets. Federal agencies such as the Reclamation Service initiated projects that were far larger than local communities or private companies could undertake. The new Forest Service (1905) assisted logging and the National Park Service (1916) helped to develop tourism.

The climax of the federally sustained frontier came with World War I, which linked the minerals, food, and lumber of the West to the appetites of a warring world. The war brought the deepest penetration of farming into marginal lands as the U.S. Food Administration guaranteed prices. Coal, tungsten, and zinc mining boomed, as did coastal shipyards—30,000 workers in Portland and more in Seattle and San Francisco.

By 1919, the federal government had helped to advance American enterprise further than ever before—more deeply into mountain valleys, further onto the arid plains, far into the interior of Alaska. In the process, Americans had improved 80 million acres of new farmland, more than doubling the total in nine western states. The western share of national petroleum production rose from 29 percent to 68 percent and the share of timber production from 10 percent to 35 percent. Along with Portland, cities like Seattle, Dallas, Los Angeles, Denver, and San Antonio had doubled in population

At the government building, visitors saw how the new Reclamation Service was not merely utilizing but reshaping the landscape of the Northwest. The first generation of settlers in the Willamette Valley had adapted to the environment they found. Their children and grandchildren in the late nineteenth century, however, had gradually altered the valley to their own desires, hand-digging networks of ditches to drain water out of braided channels, marshes, and wetlands. The newly firm valley floor sprouted wheat farms that marketed crops through new towns like Halsey and Shedd. Now the federal government’s Reclamation Service, created in 1902, was undertaking to bring water to previously parched land.

The exhibits included a working model of the Palouse irrigation project in eastern Washington and a relief model of the new Klamath project in southern Oregon, begun in 1905. Beginning in 1917, the project cut off drainage from Upper Klamath Lake, drying up Lower Klamath Lake and Tule Lake. Farmers turned the lake bottoms into fields and used a complex of canals and ditches to bring water from the upper lake. The population of Klamath County surged from 4,000 in 1900 to 32,000 in 1930, setting the stage for bitter disputes about the allocation of water between farming and protection of endangered fish species in 2000 and 2001. 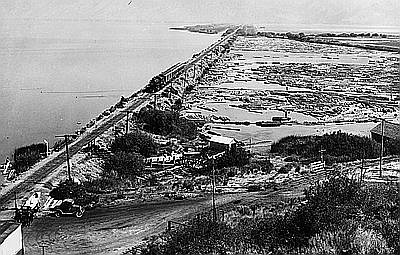 In 1905, the business of logging had an entire building to celebrate its development. The …

For sparsely settled Oregon, the result of new railroads, new irrigation canals, new farms, and new logging techniques was a dramatic 63 percent rise in population between 1900 and 1910—from 413,000 to 673,000.