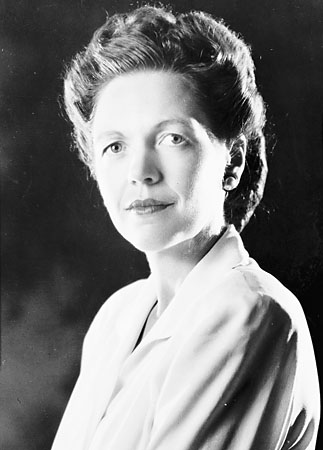 In the twentieth century, women and minorities made modest gains in Oregon’s elective politics. Nan Wood Honeyman, a Democrat and the daughter of C.E.S. Wood, was Oregon’s first female member of Congress, representing the Third District for one term during the late 1930s. Edith Green, a liberal Democrat who represented the Third District from 1955 to 1975, became a powerful force on the U.S. House of Representatives education committee. Only two other women have been elected to the U.S. House of Representatives: liberal Democrat Elizabeth Furse represented the First District between 1993 and 1999 and survived three very close election campaigns, and Democrat Darlene Hooley, elected to the Fifth District seat in 1996, served six terms.

In the U.S. Senate, Maurine Neuberger was appointed to Richard Neuberger’s seat after he died in 1960. She was elected in her own right later that year and served one full term. Neuberger decided against re-election in 1966 when the Oregonian and other newspapers in the state accused her of being an absentee senator and neglecting the state’s business.

Women candidates made strides in statewide elective office. Republican Norma Paulus, the first woman elected secretary of state in Oregon, served two terms (1977-1985) and then ran for governor, losing to Democrat Neil Goldschmidt in the 1986 election. She later was elected to two terms as superintendent of public instruction (1991-1999). Barbara Roberts, a Democrat who served as secretary of state from 1985 to 1991, was elected Oregon’s first woman governor in 1990. She served one term, deciding not to run against John Kitzhaber challenged her in the primary. Mary Wendy Roberts was elected to the Oregon House of Representatives in 1972 and the Senate in 1974. She then saw service in statewide office as commissioner of Labor and Industries from 1979 to 1995.

During the last two decades of the twentieth century, Oregon politics became increasingly volatile, with environmental and natural-resource issues, field burning, gay rights, taxes, doctor-assisted suicide, school funding, and vote-by-mail elections among the more controversial matters before the public. With sharply declining salmon runs in the Pacific Northwest and the federal government’s decision to list several stocks as threatened or endangered, rural citizens have sometimes felt themselves under siege to decisions made in metropolitan Oregon.

In an effort to restore salmon populations and to fend off further endangered-species listings, Governor Kitzhaber initiated a salmon restoration plan and formed local watershed councils. Urban and rural Oregonians also differed over the question of grass field-burning in the Willamette Valley, with urbanites arguing that the dense smoke in the valley each year tarnished the state's reputation for livability.

Anti-gay initiatives, at the center of what some called Oregon’s culture wars, found greater support in rural areas than in Willamette Valley cities such as Eugene, Corvallis, Salem, and Portland. The Oregon Christian Coalition and Lon Mabon’s Oregon Citizens’ Alliance (OCA) supported measures in 1992 (Measure 9) and 1994 (Measure 13) condemning homosexuality and targeting the state’s gay and lesbian population. Voters said no to the restrictive Ballot Measure 9 by a margin of 56 percent to 44 percent and turned away Measure 13 by only 51.5 percent to 48.5 percent.

In March 2004, the fight for marriage equality gained momentum when Multnomah County began issuing marriage licenses to same-sex couples after the county attorney determined that state constitution prohibited discrimination against them. The legal opinion was challenged by the state, and in the following year, the Oregon Supreme Court declared all same-sex marriages in Multnomah County void. In November, Oregon voters passed Ballot Measure 36, a constitutional amendment that defined marriage between a man and a woman.

The ban on same-sex marriage was declared unconstitutional on May 19, 2014, when a U.S. federal district court judge ruled that it violated the Equal Protection Clause of the Fourteenth Amendment. With the decision, Oregon became the eighteenth state to legalize same sex marriage.

One of the most divisive issue before the Oregon public since the 1980s has been taxes, and voters turned back several property-tax limitation proposals that were similar to California’s pioneering Proposition 13, which passed in 1977. Finally, Oregon voters narrowly approved Ballot Measure 5 in 1990, a tax-limitation measure that severely restricted the fiscal ability of local governments to support schools and other services. The more liberal and urban areas of the state provided the majority of the support for Measure 5.

While limiting the ability of local governments to raise revenue, the tax measures shifted much of the property-tax burden from businesses to individuals. Oregon legislators and Governor Kitzhaber grappled with the increasingly contentious funding issue in every legislative session, with the most combative arguments taking place during the recession-ridden and revenue-short year of 2002.

During the 1973 legislative session, Representative Vera Katz introduced a bill that would have prohibited "discrimination in employment and certain real property transactions" based on "sexual orientation." This … 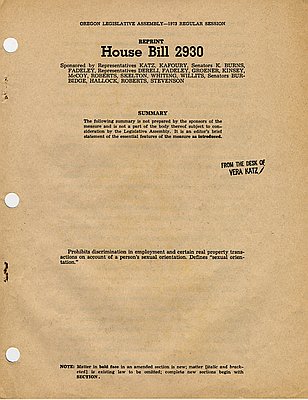 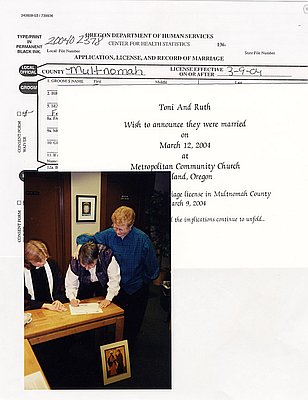